This is Buster, and the other pile of wool beside him is Brock, they are right where they are supposed to be ............ but this morning instead of 2 rams with big curly horns in this pen there were 3.  No open gates no sign of entry.  I use stock panels for pens for the shetlands, holds up better that standard rolled field fencing.  I use T-posts and some hay rope which I have an a bunch of to recycle.  This way pens can be taken down, moved, cleaned with the tractor, put back or relocated easily enough.  However hay rope does not hold up to those big beautiful curly horns very well.  C'Oso had managed to break a panel lose and can crawl under. 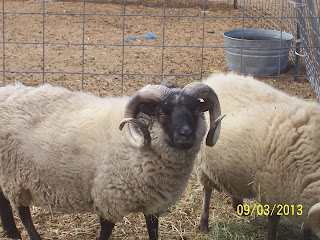 After some temptimg with some hay I got C'Oso back out thru the gate into the alley and back into a gate in his own pen with the help of a few panels in the alley to block him from coming back to socialize.  It was no big problem I didn't have to get into any of the pens with the 'boys' but after an extra half hour out in the sun this morning once again something on my to do list did not get done.  Come winter when I won't have to drive T-posts into ground as hard as concrete my goal is to put double panels with a tree or two inbetween the ram pens.  But since they did share a common fence line there was not fighting between any of the boys, did see a couple of minor head bumps while they were together but I have Dorper ewes that are more aggressive than these guys.
Guess I better check that to do list, I know there is a lot of laundry to be done, maybe I can check off some of that this afternoon.
I heard a rumor that there is World Wide Spin in Public Day coming up .... good cause that is what is on my list for this Sunday afternoon, an afternoon at neighbors winery spinning with some friends.  That is if the sheep stay where I put them.﻿
Posted by Tombstone Livestock at 3:34 PM