This morning Pebble had the small white lamb that is laying down  and the black one, not to be left out Macey on the left had the large single standing lamb soon after ....... all 3 of these are rams .... oh well, easier to decide who not to keep when they are rams.  Unless I breed the 3 yearling ewes this fall that's it til next year for the Shetlands. 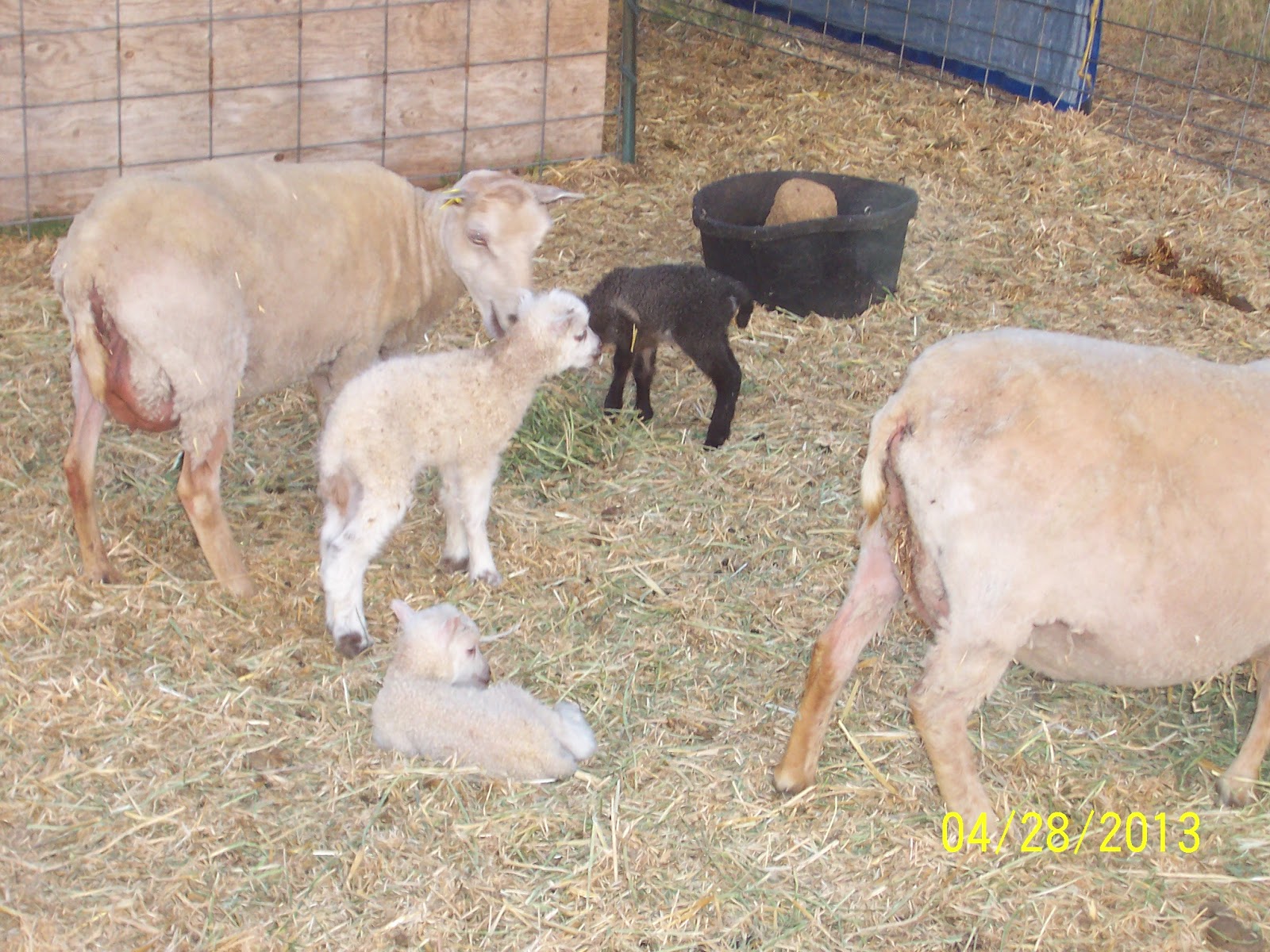 Picture below is of pasture last year on May 1st, what a difference a year makes ..... 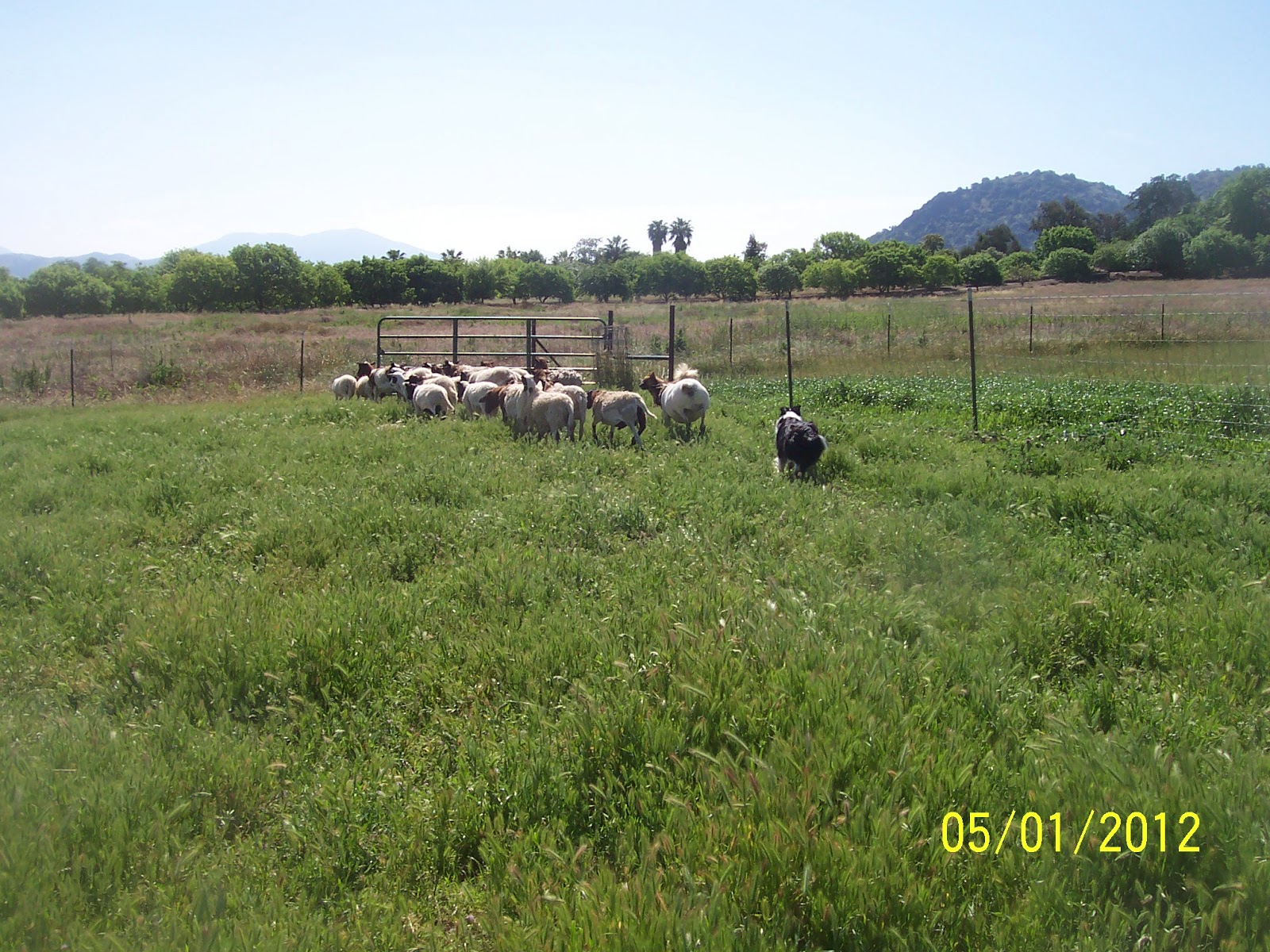 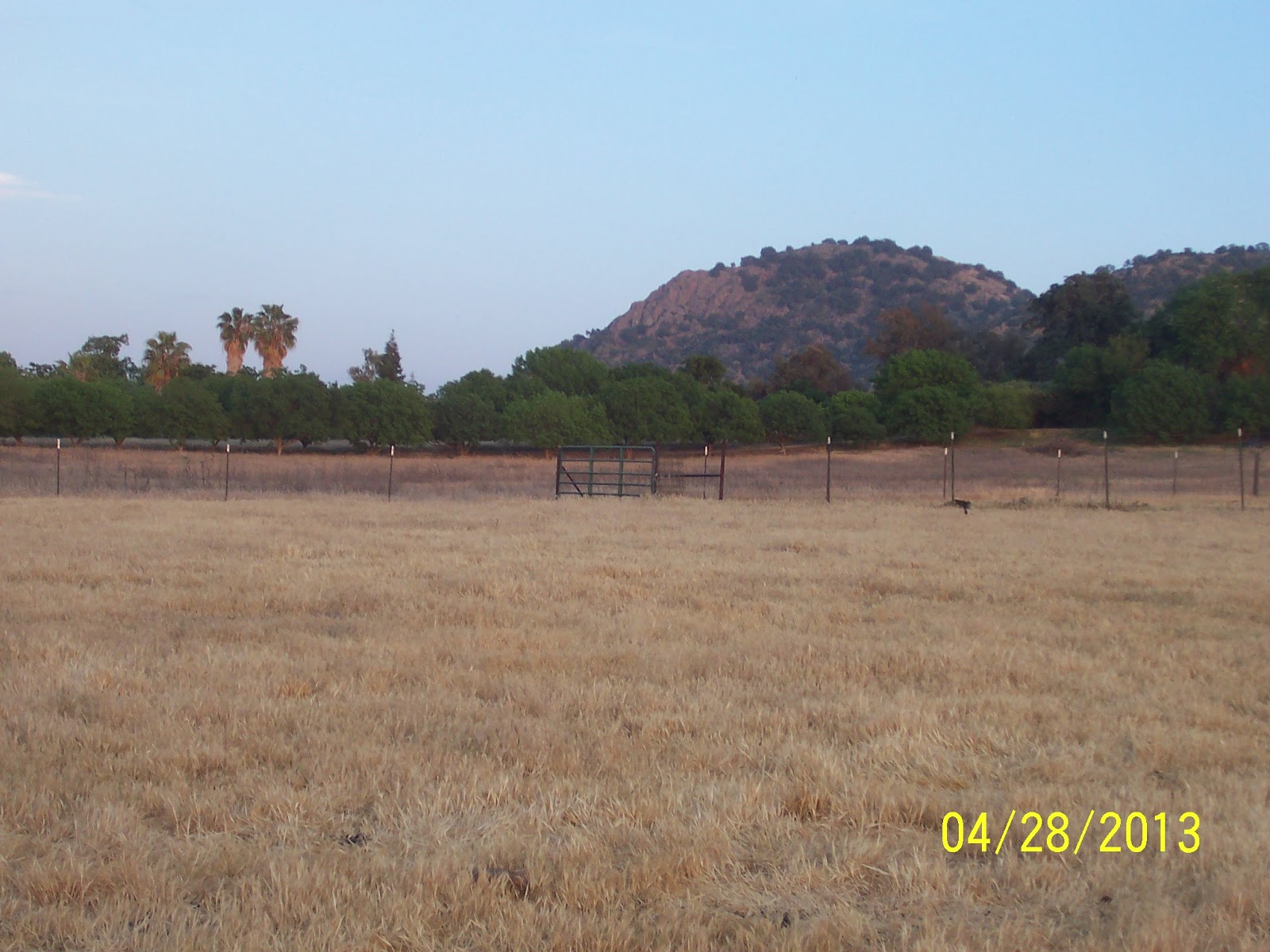 There are about 10 more Dorper ewes that are due to lamb soon.  The little ram that has had so much trouble standing is still hanging in there, getting a little stronger every day. 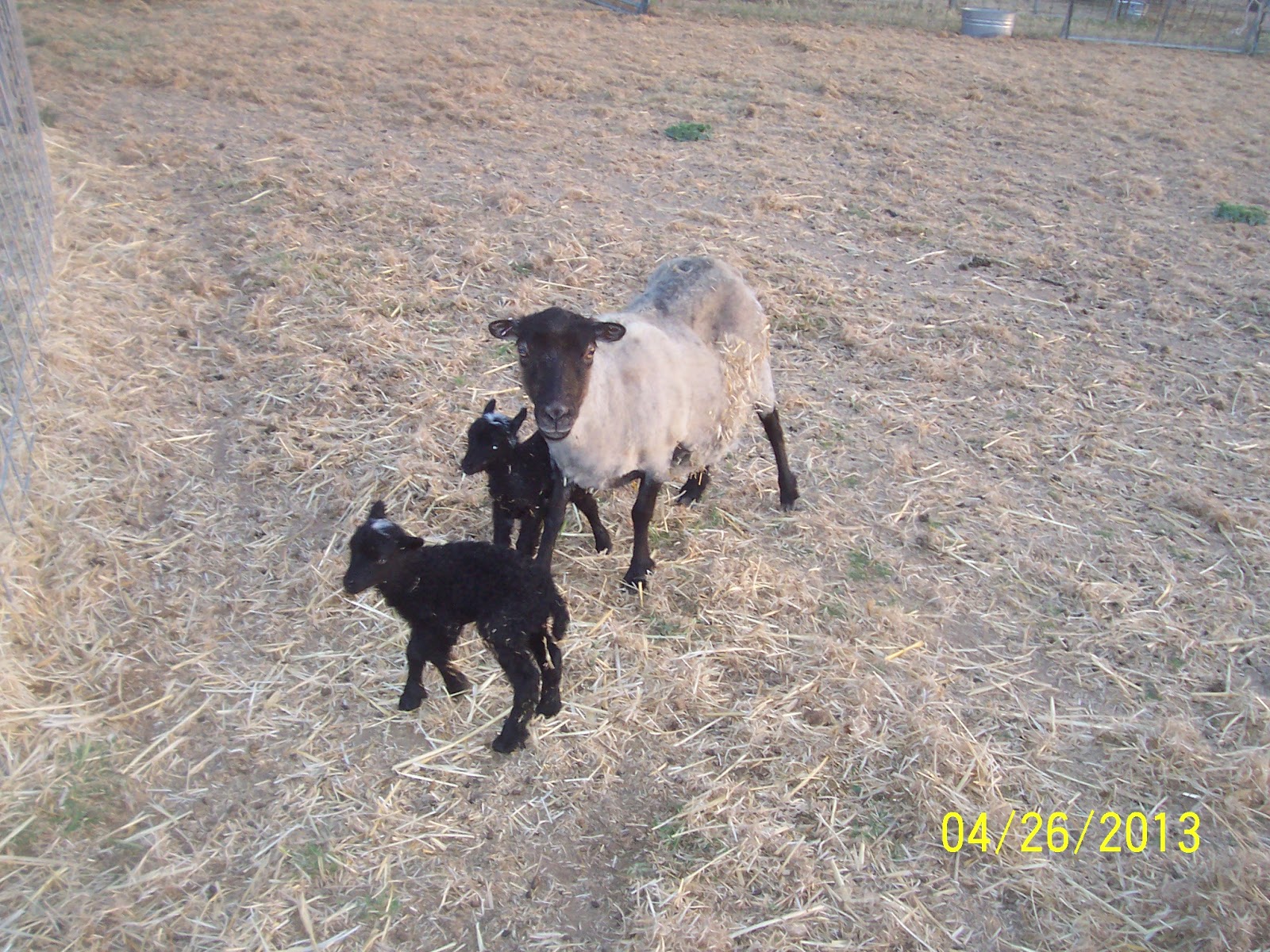 Little white Angora billy, when ya got an itch, ya just have to do the best ya can. 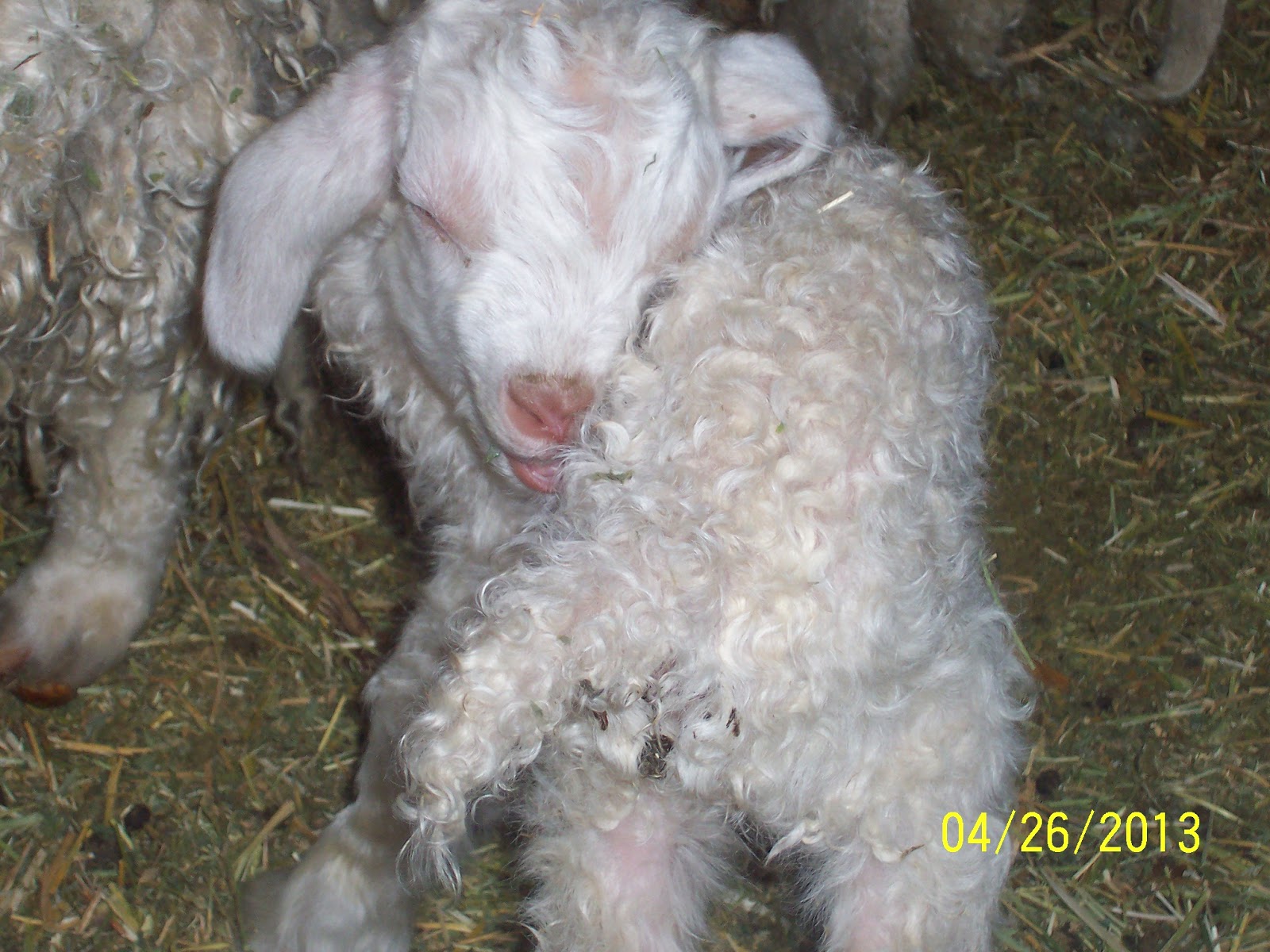 Bella checking out the little Dorper ram lamb, born Wednesday morning, could not his back legs under him to stand up, brought him in and gave him some powdered colostrum, didn't think he was going to make it, but he is hanging in there and is now able to get up on his own and nurse, still a struggle and he tires out easily, but he is hanging in there.   Red marking paint on his shoulder matches mark on his mama. 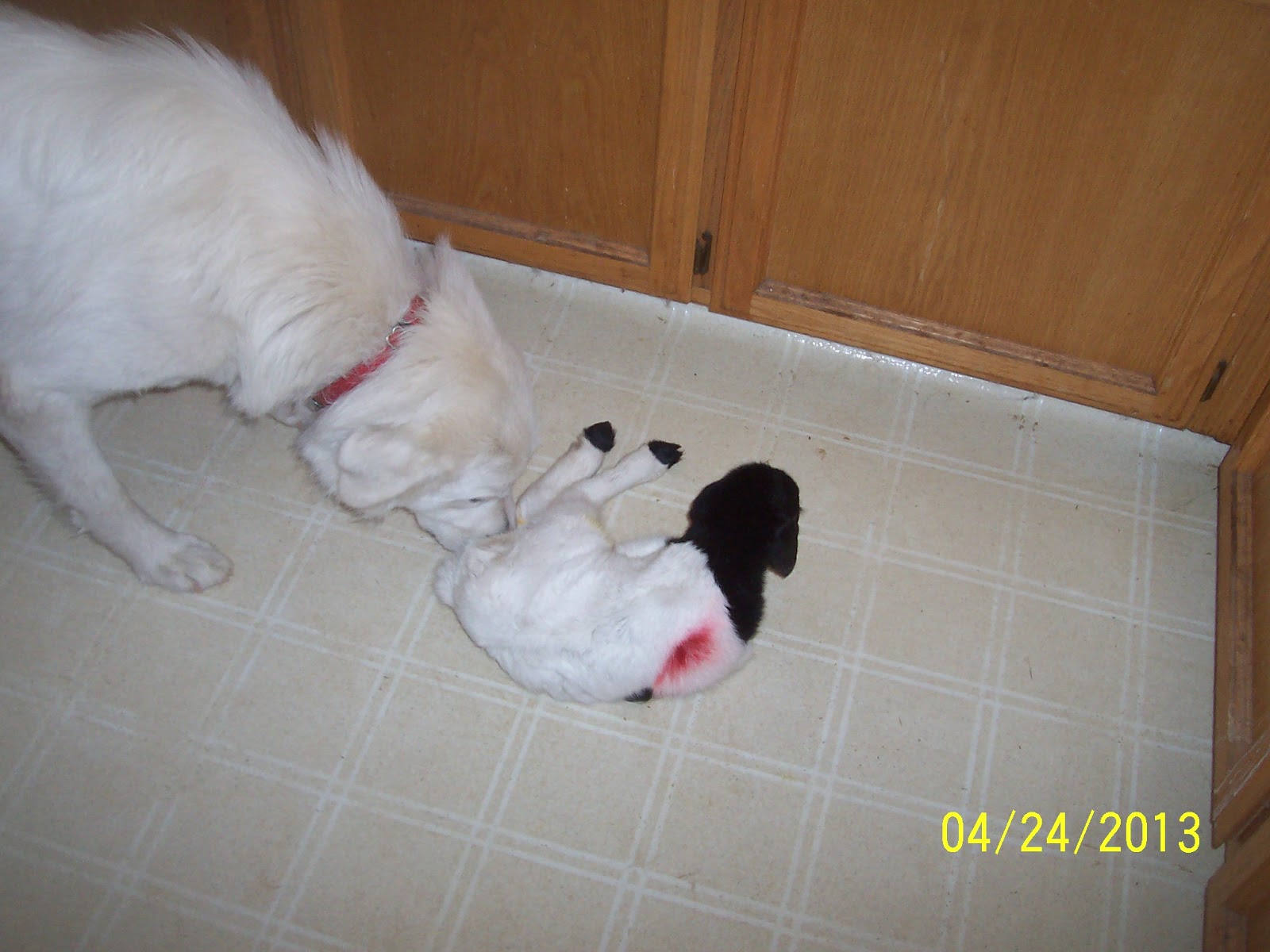 I need to get up early every morning and enjoy the sunrise over the Sierras. 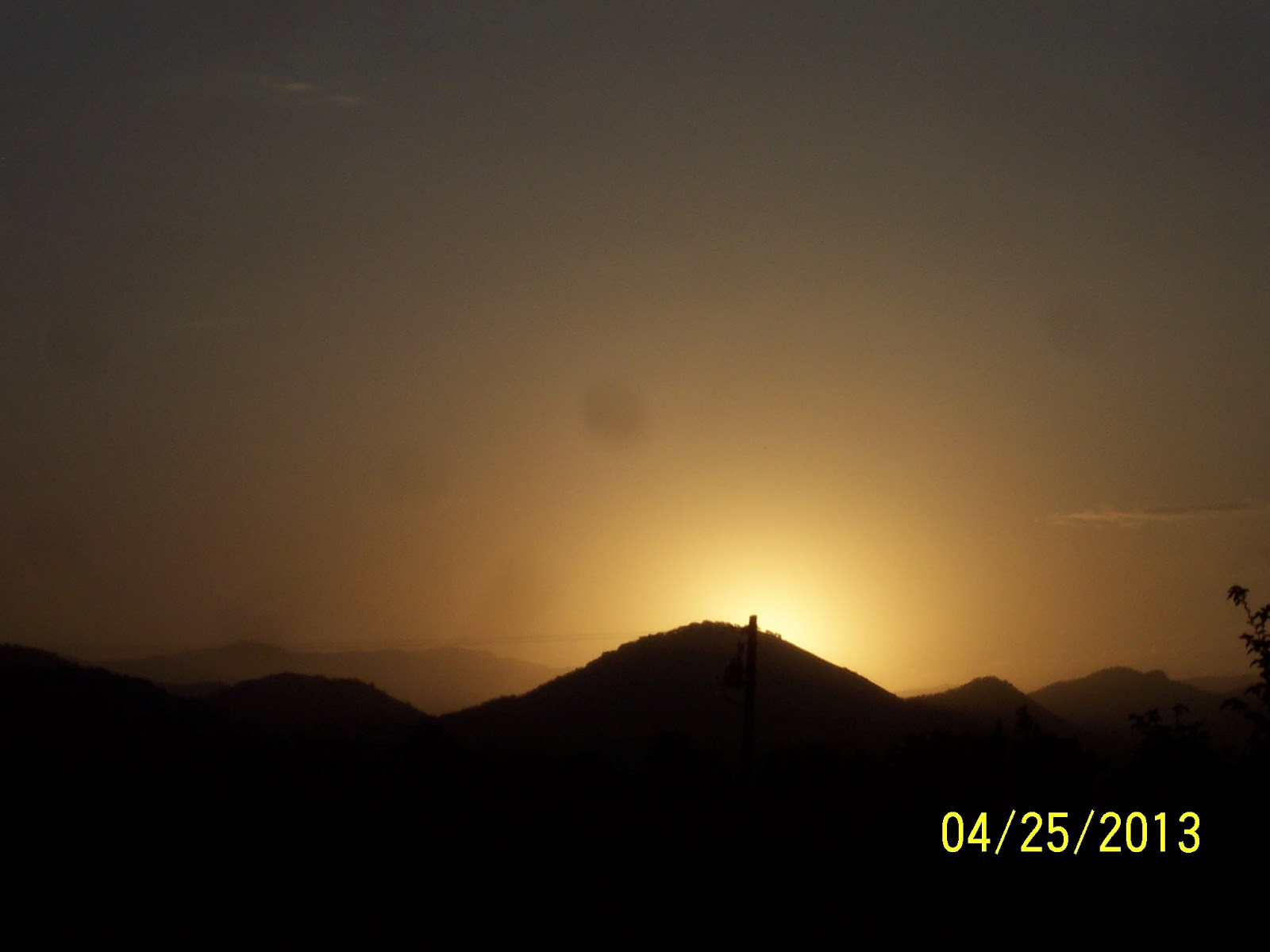 I just heard on the news weather forecast .... 100+ day on it's way, way to early, it's still only April, end of April yes, but way to soon to be that hot.  Hard to believe this year is almost 1/3 over with.
Posted by Tombstone Livestock at 2:31 AM 6 comments:

Sheep have been sheared 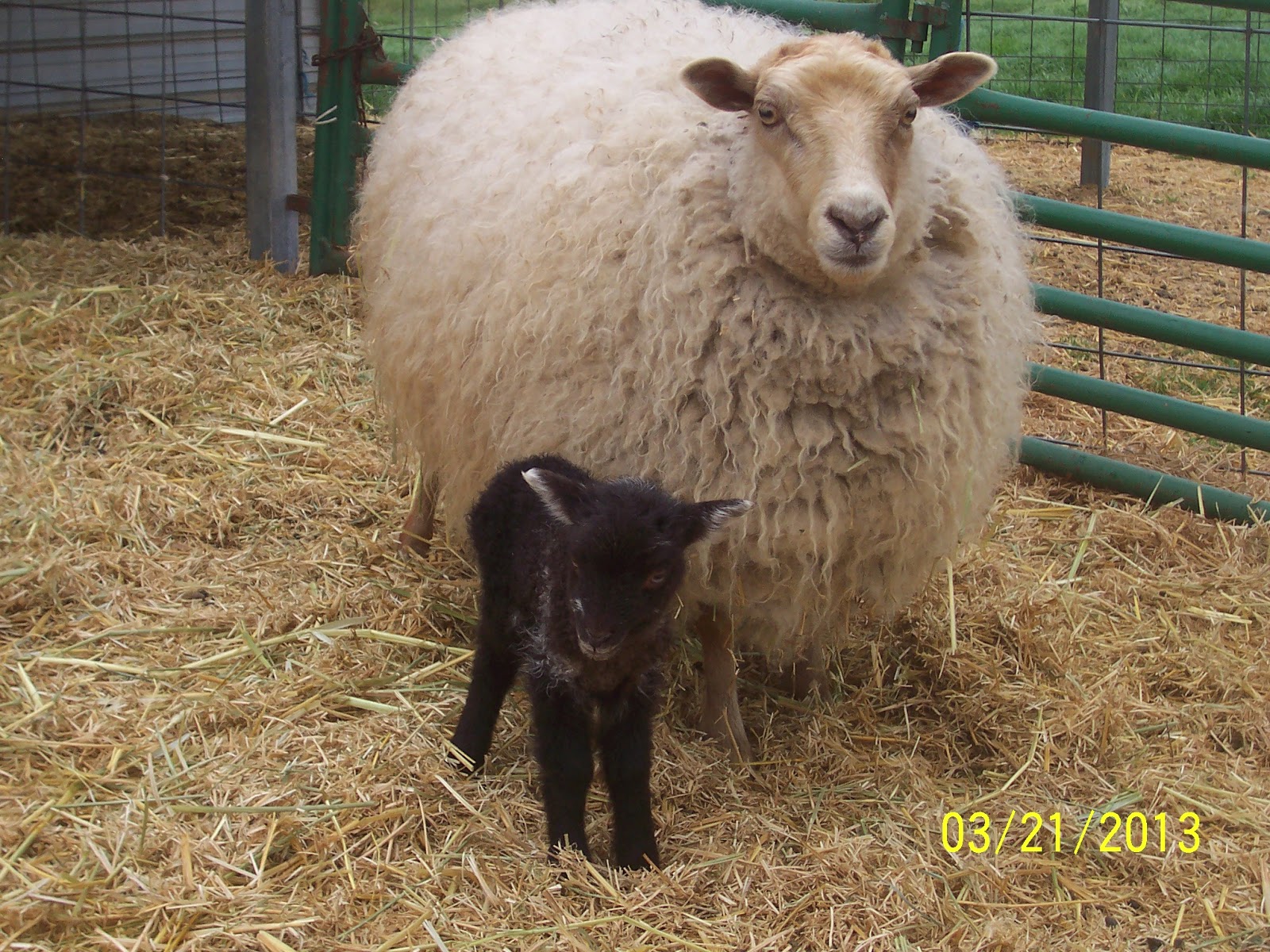 Brandy after ....... she looks so little, petite, and ready for summer sunbathing.  Wish I could shed pounds that easy for summer season. 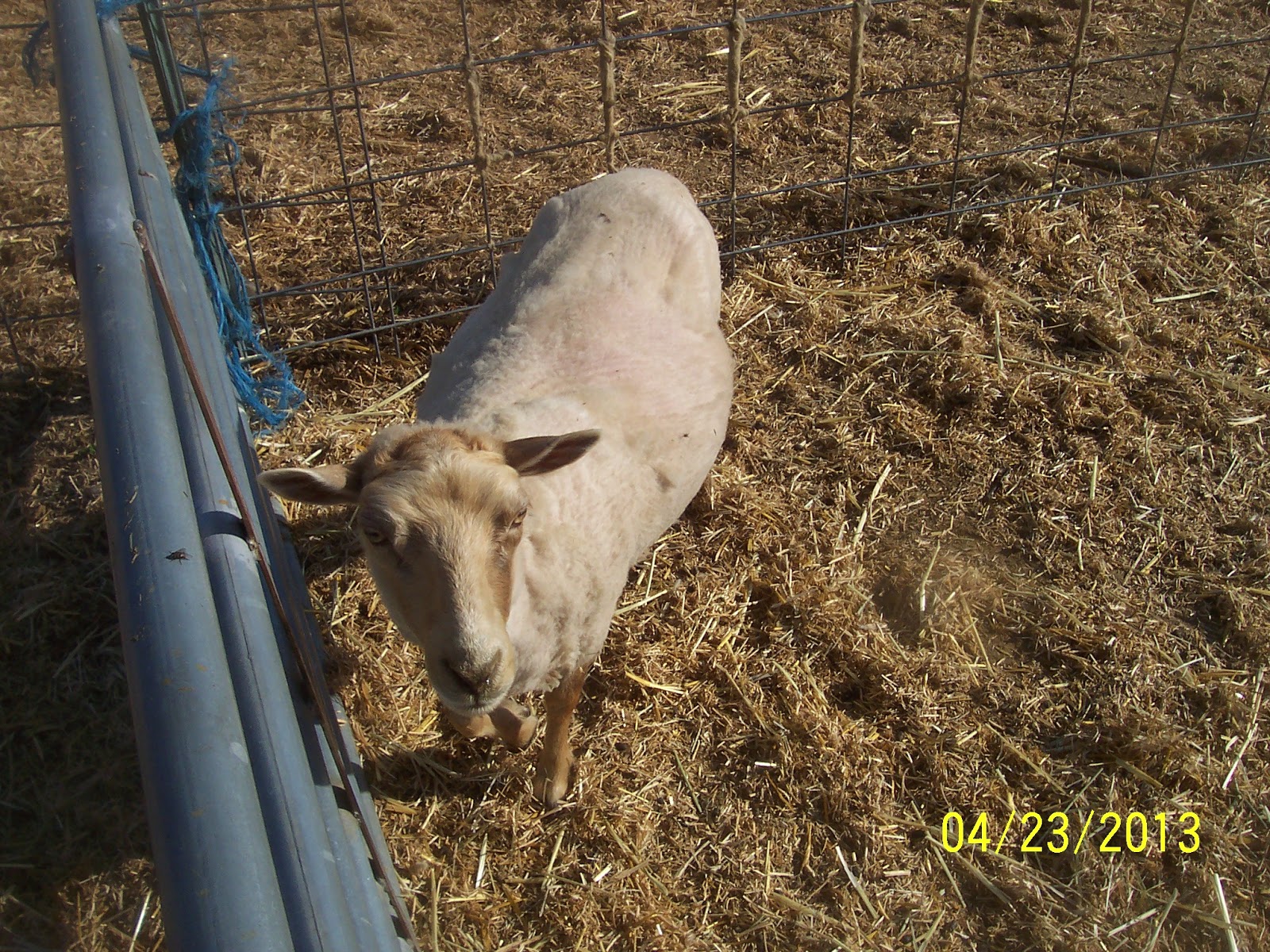 The lambs are getting bigger, but look huge now that the ewes look so much smaller 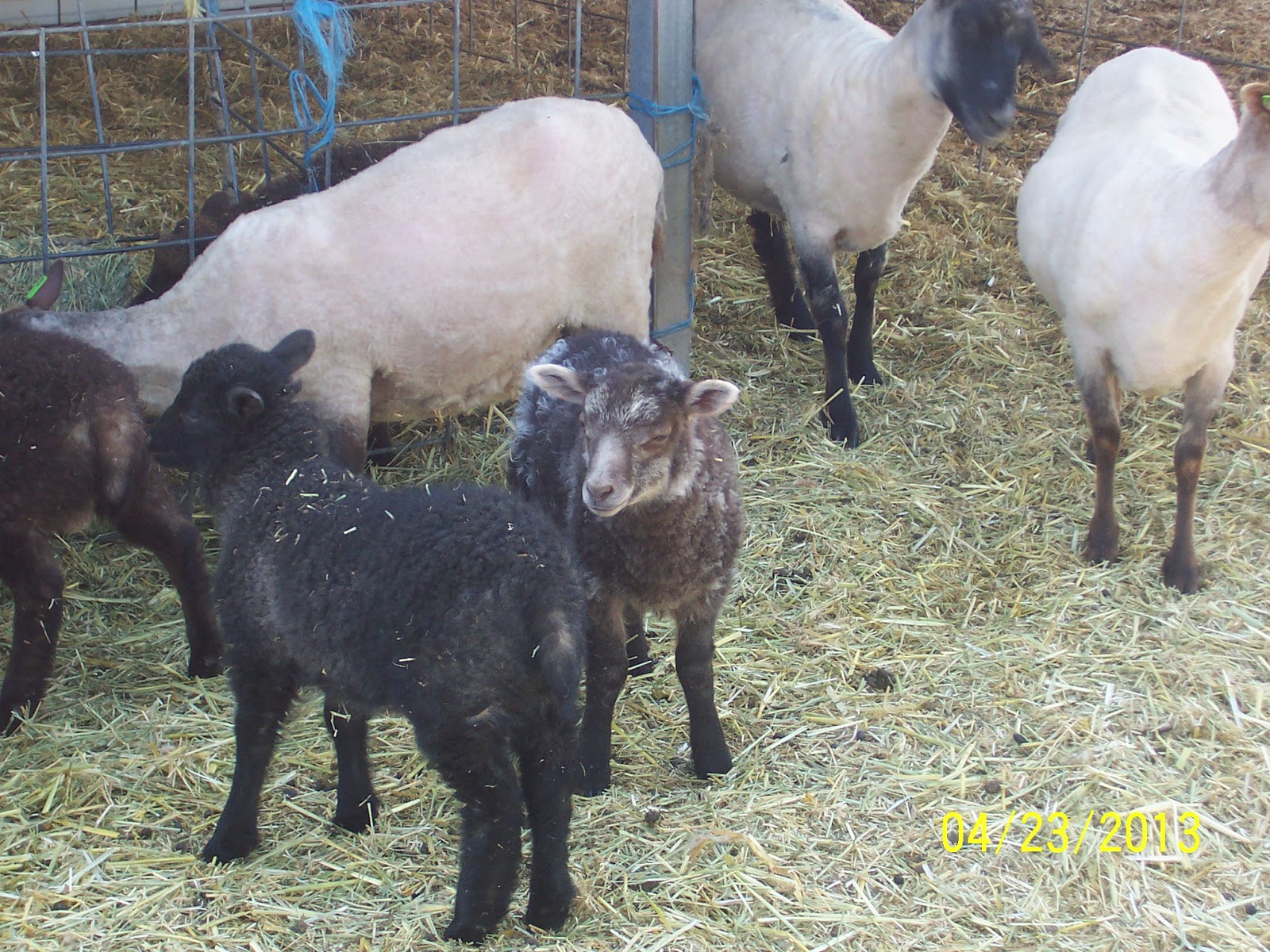 And Daffodil just keeps getting cuter by the day 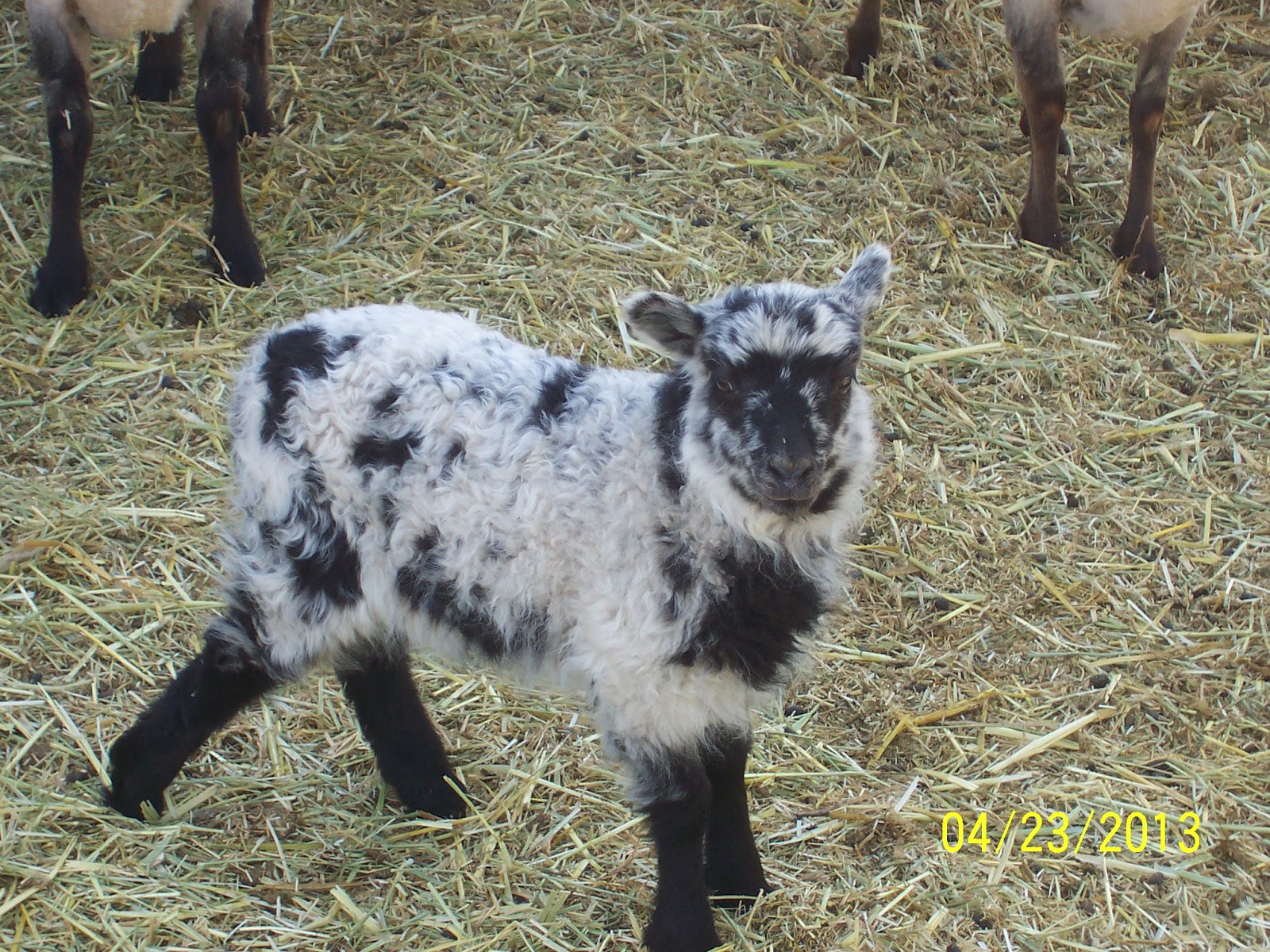 Pastures have already turned brown and dry, going to be a long hot summer ...
already  several days have been in the 90's + 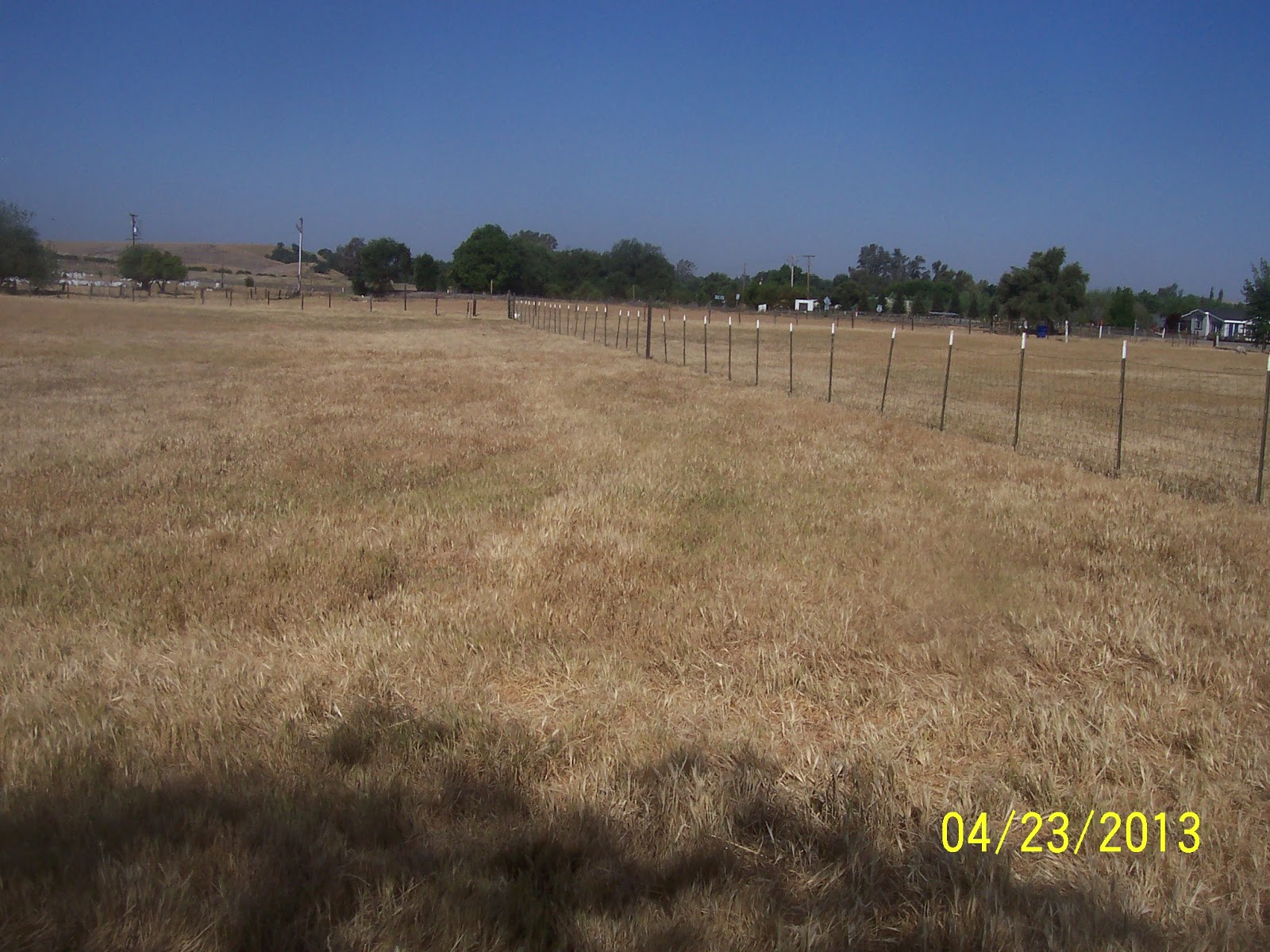 Posted by Tombstone Livestock at 8:07 AM 14 comments:

I was finally able to get blogger to load my other picture from yesterday's lambing.


I got to thinking last night about when this ewe lambed the last time. On the Dorpers since they are not registered and are basically a meat source I don't keep real accurate records. I used to write all lambings on a calendar, but if you notice all pictures I take are dated. This ewe with twins born yesterday, April 14th are a ram and a ewe. Both of these are large good size lambs. 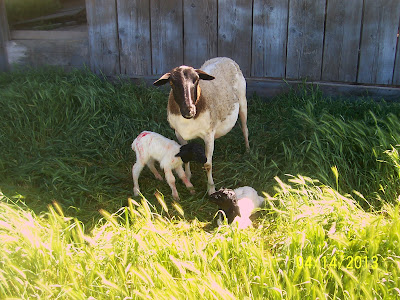 I had taken several pictures of her last lambing to get all the triplets in the picture, not noticeable in these pictures are the markings under her neck and the white spot on the top of her head. These lambs were born on September 27th, 2013. That is 5 lambs in less than 7 months. This ewe is on her own Star Breeding system. The triplets were fairly small and she did end up loosing the smallest ewe lamb. Had I taken it and bottle fed it, it might have survived. 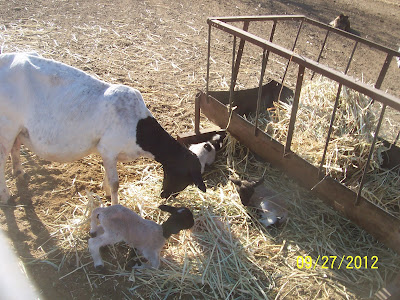 And today all thoughts and prayers to the people in Boston and especially to the first responders.
Posted by Tombstone Livestock at 2:29 PM 4 comments:

This morning when I went out to feed one of the Pygoras I purchased last October had a little white Pygora Billy........ 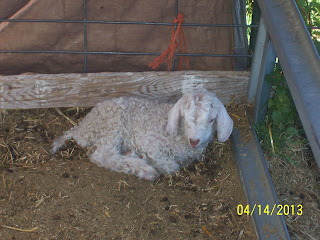 After spending some time working out side, I noticed the dogs running up the hill and one of the Dorper ewes, chasing Fancy off.  So off I went to check, and sure enough it looks like maybe a Dorper ram and ewe lamb.  Mama was mad enough at the dogs for giving away her hiding spot. the babies were still all wet and she was still cleaning them up so I did not check for sure what they were but did notice one is a ram as he was wagging his tail as he was already up and nursing.

Well Blogger is being a pain in the kuzoooooo, and is not loading second picture and I have chores to go do.
Posted by Tombstone Livestock at 5:33 PM 8 comments:

Sunrise and Ollie with Shetland #7 and #8

I got up early this morning for a very full day, started the day going to the sale with my daughter taking one of her heifers so I took along the 4 Boer goats that were ready to wean.  Afterwards we moved the 3 heifers she had here up to another ranch to meet a bull, then brought 2 of her bred cows here to stay until their calves are born.

While having my coffee this morning I got to watch the sunrise. 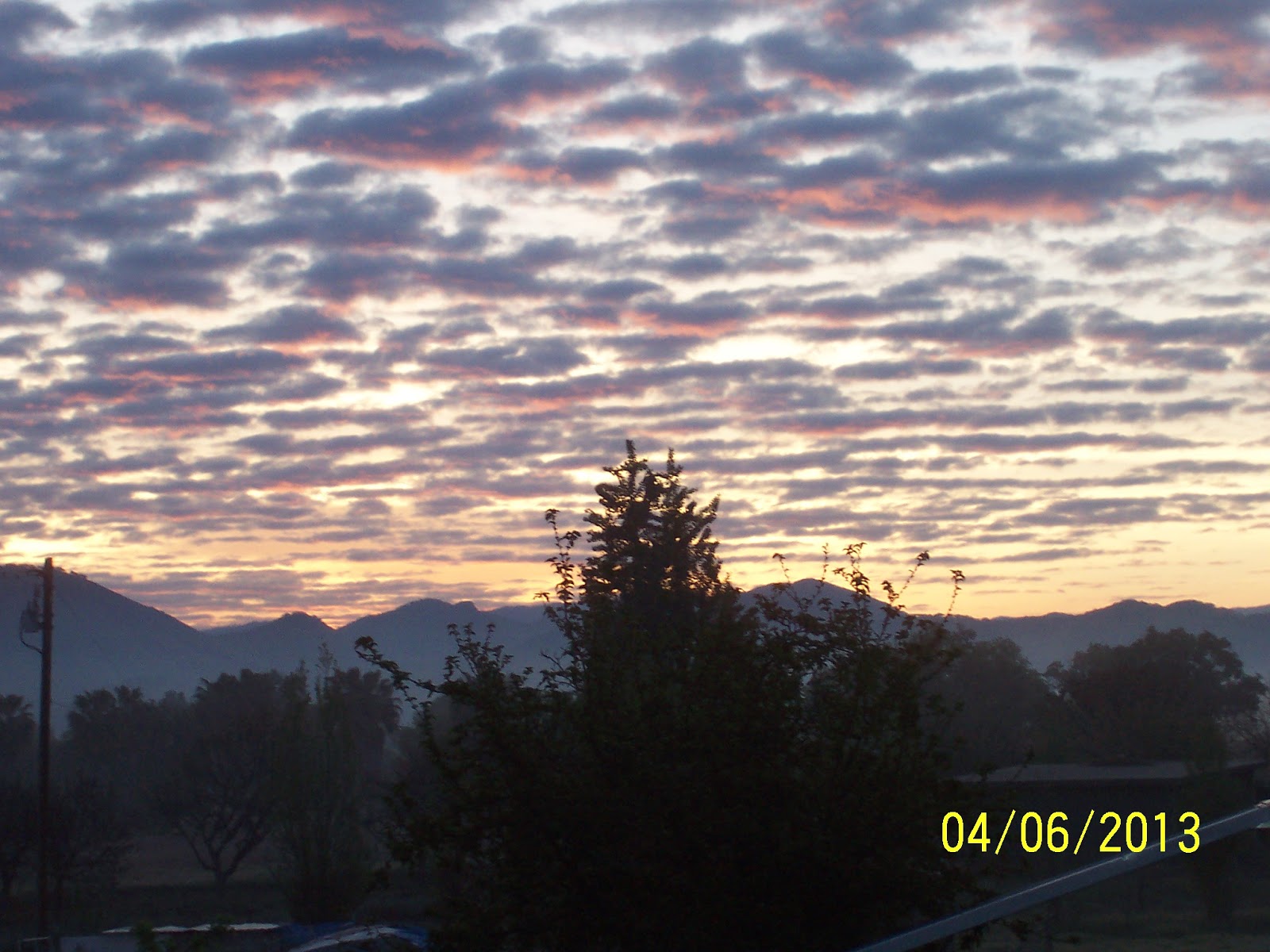 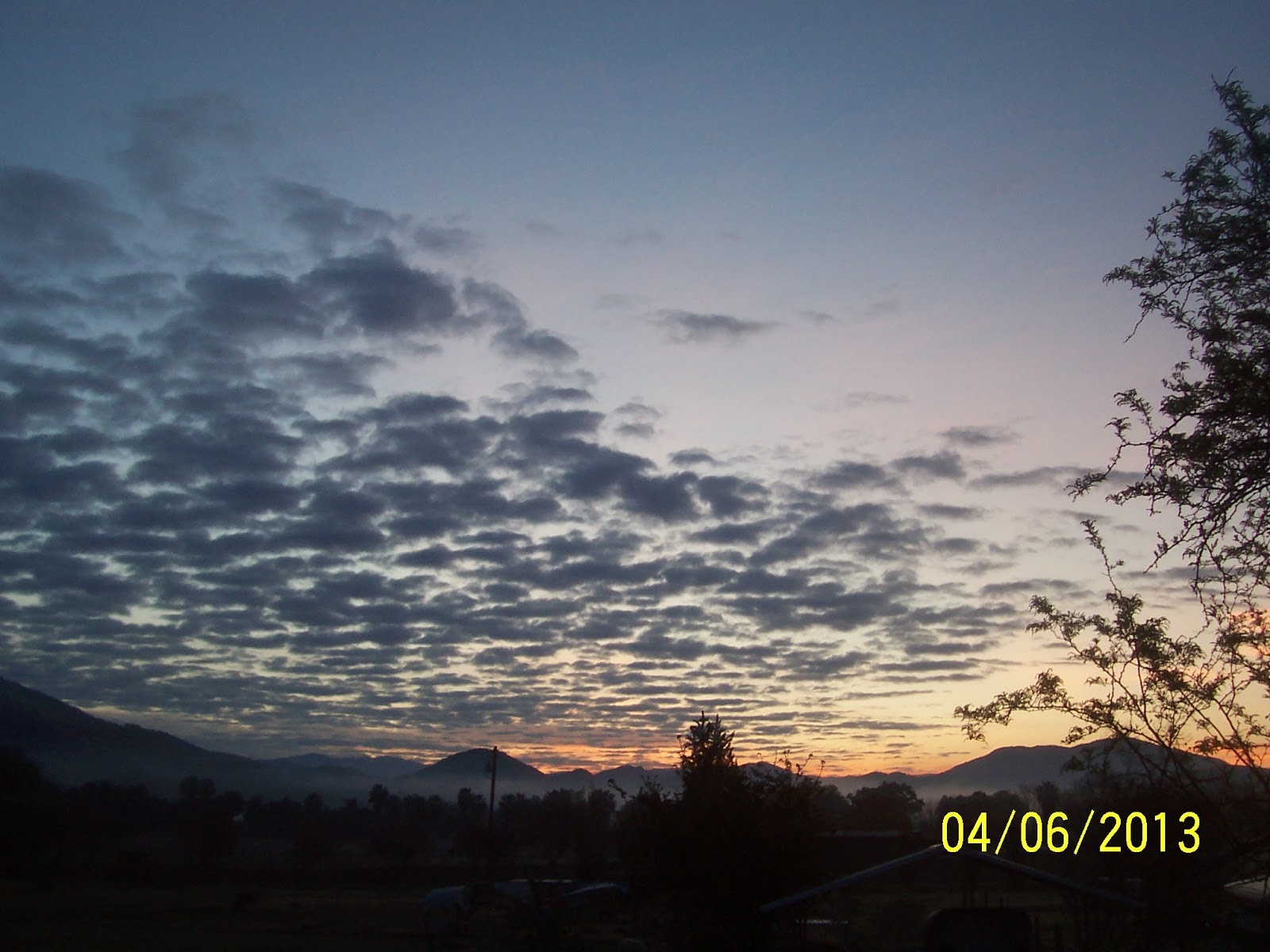 Vapor trail from an airplane, almost looks like the mountain is letting off steam. 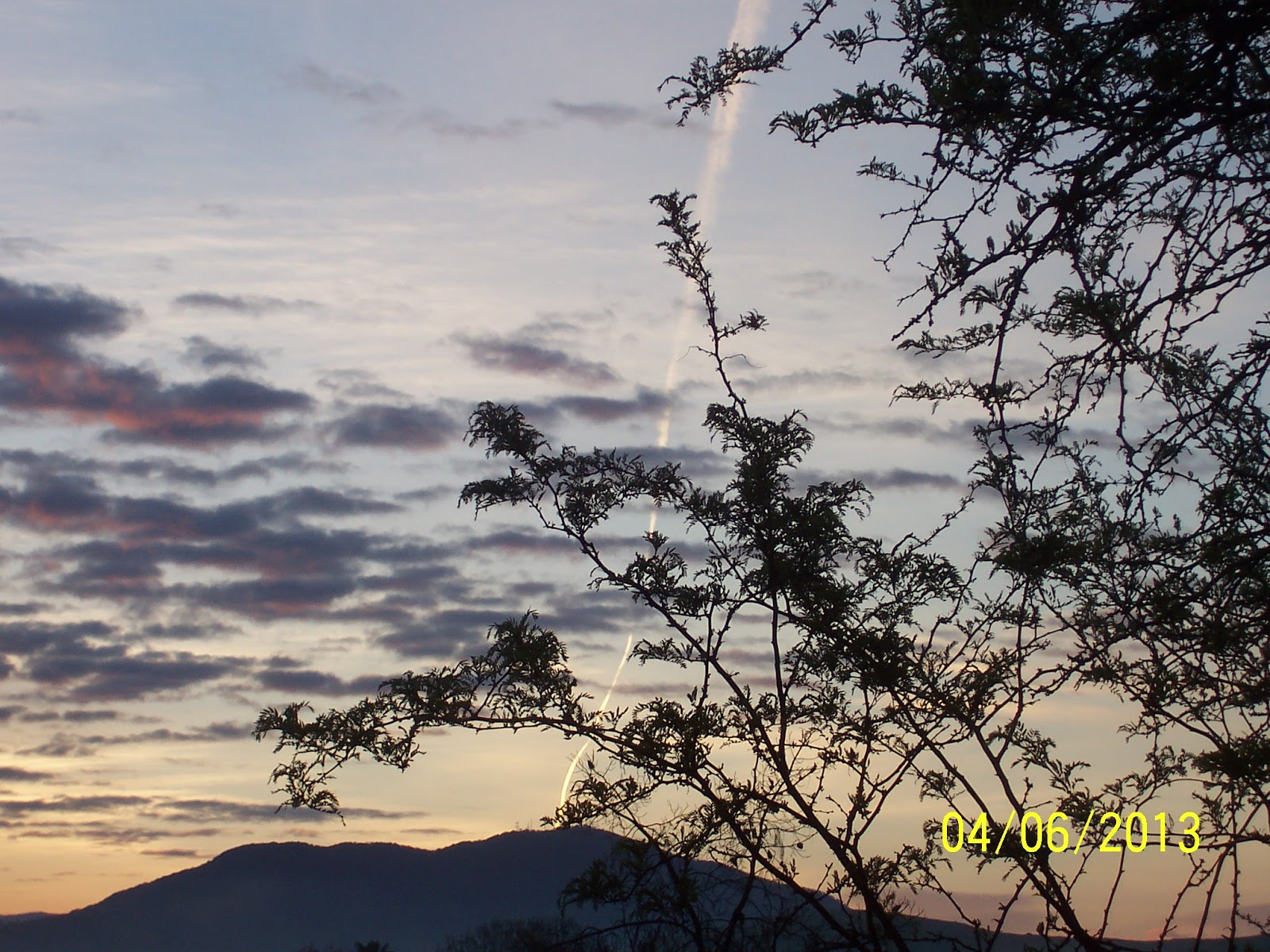 And this afternoon, Ollie, one of my older ewes, had these two ewenique lambs, one ram and one ewe, a
very flashy pair. 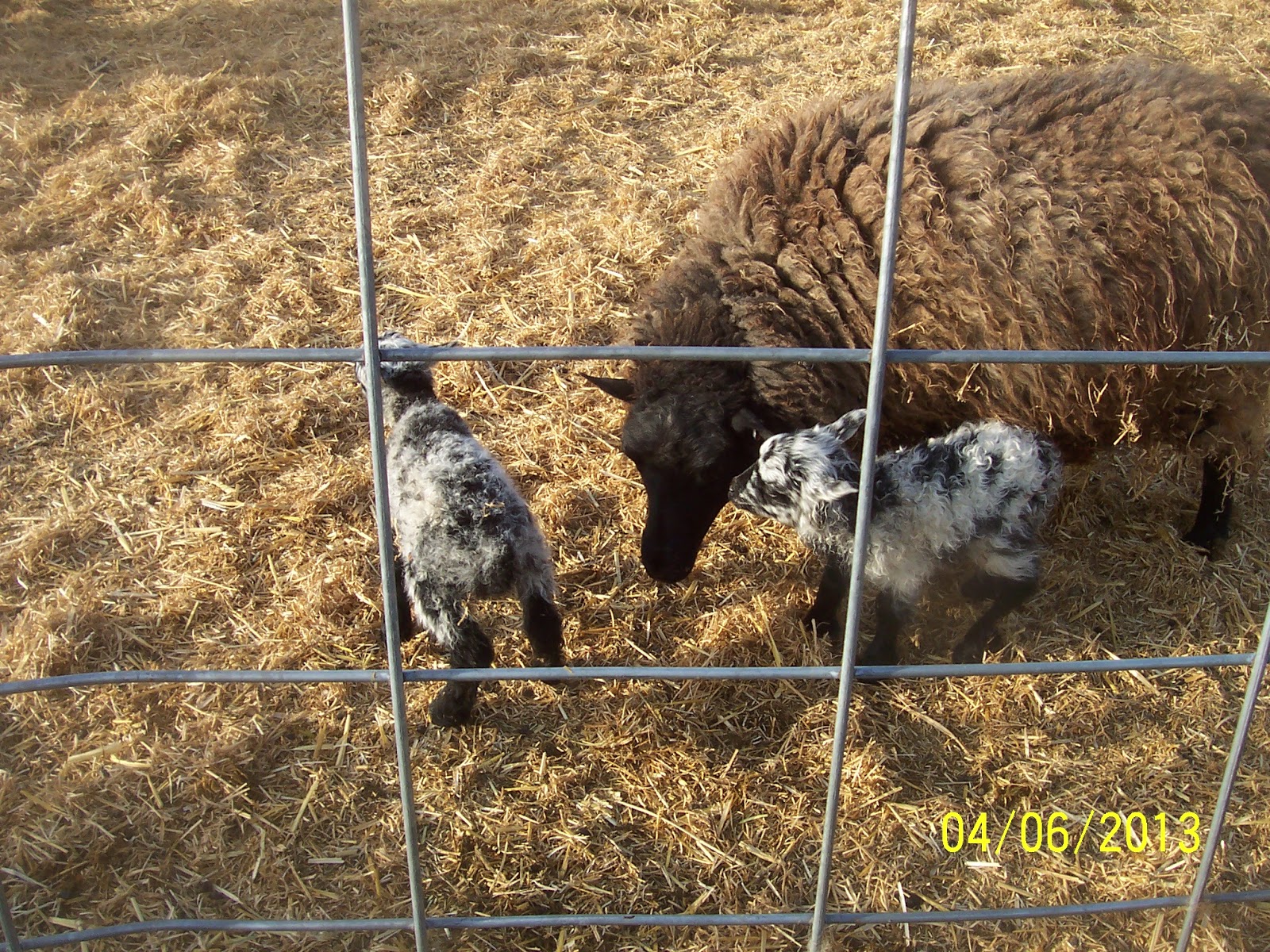 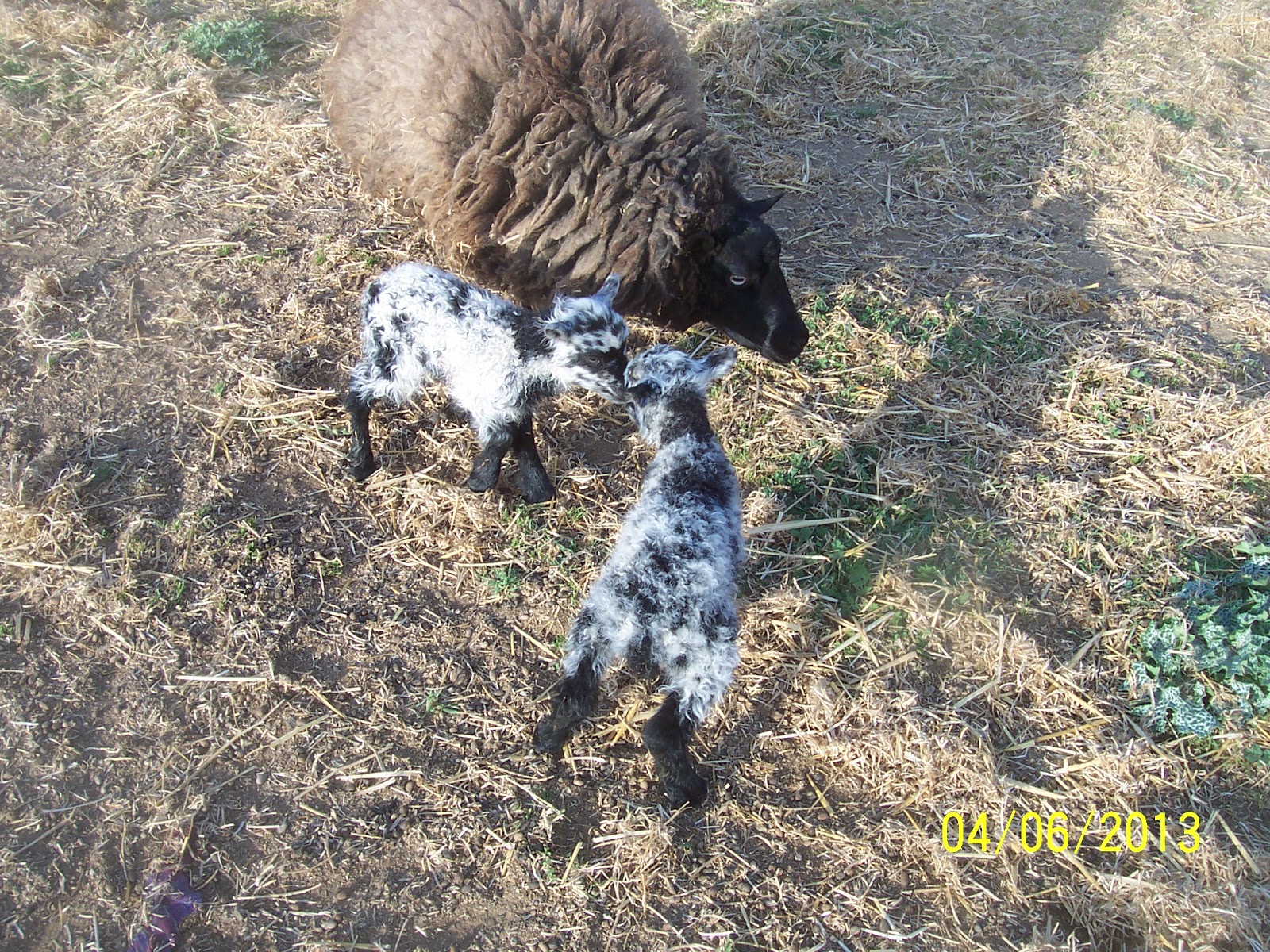 It could have been a really nice day, could have....

One of my daughter's birthday was Wednesday, I was going to take her to lunch but since she had a few days off we went to Breakfast this morning instead.  Did a little shopping and then came back home, she was going to help me do some yard work.  I just got my high wheel weedeater out of the shop 2 weeks ago, and she had her hand held one, we were going to attack all the dry foxtails and weeds that were getting out of control around the back of the house.  My weedeater stalled in the tall grass, a sign I usually take as I need a break, went and got us some cold bottles of water, came back to start my machine and the little red rubber bubble you pump for gas before you start ....... was leaking gas every time I pushed it.  Oh well, lots of other things needed to be done, so I turned on the water (split hose to water cows and plants) and watered some potted plants and couple of planters, and pulled a few weeds.  When the cows water was full I went to turn off the splitter on their hose at the faucet under my bedroom window....... wait for it ...... only been a short time since I had turned it on .... and there was a big FAT snake, a BIG, FAT, RATTLESNAKE, thank goodness she was here.  I grabbed a shovel and pitchfork, she got it with the shovel, did not kill it but put a big gash across it's body about 6" from it's head, it went under the foundation, under the bedroom, I am mentally telling myself it went their to die.  I am beginning to think since I have seen so few mice lately (I import them in hay bales) that snake has been living under the house for some time.

Another downer this week, Blain's ram lamb I was going to name Dusty, I found him dead Wednesday, he was 3 days old.  It was Blain's first lamb and she was acting strange, kept the lamb away from the others in the pen.  She stayed in the shelter so I fed her in there, didn't think much of her staying off by herself, but now I wonder why.  First time I have found a lamb that young bloated, there was not anything it would have or could have eaten to cause it.  Usually when they die at that age they have not received enough milk and their sides will be sunken it.  Friend asked me tonight if I could have another rattlesnake out by the sheep, I sure hope not.

On the brighter side, shearer called last night ... he will be here in two weeks, whoopee, I hear the weather is going to get hot again next week, these sheep look so hot with those big wool coats.

Looks like I will be wearing my big black rubber rain boots thru the summer and watching where I walk, so glad the dogs did not spot the snake first.
Posted by Tombstone Livestock at 8:33 PM 8 comments:

Had a nice day with my neighbor, we went into the college to the Horticulture Dept. and bought some plants, then off to lunch and a little Antique and Collectibles Store.  When I got home the dogs were out in the pasture barking up a storm to let me know there was something needing my attention out under the big fig tree where the Shetland ewes were laying in the shade.

This is Blossom and Shetland Lamb #6, so score is now at 3 ewe lambs and 3 ram lambs, 'cause this little cutie is another ram, why, oh why, are the ones with the variety of color rams.  So far I think I have names picked for the rams.  Since this is a "D" year I think this little guy that has kinda a raccoon eye mask is going to be named Dalton.  Since I live between the Valley's Blossom Trial and Dalton Mountain named after Emmett Dalton of the Dalton Gang.  And here you thought the Dalton Gang was only in Kansas.  Bunny's ram is going to be Dusty, and Brandy's ram is going to be Dandy. 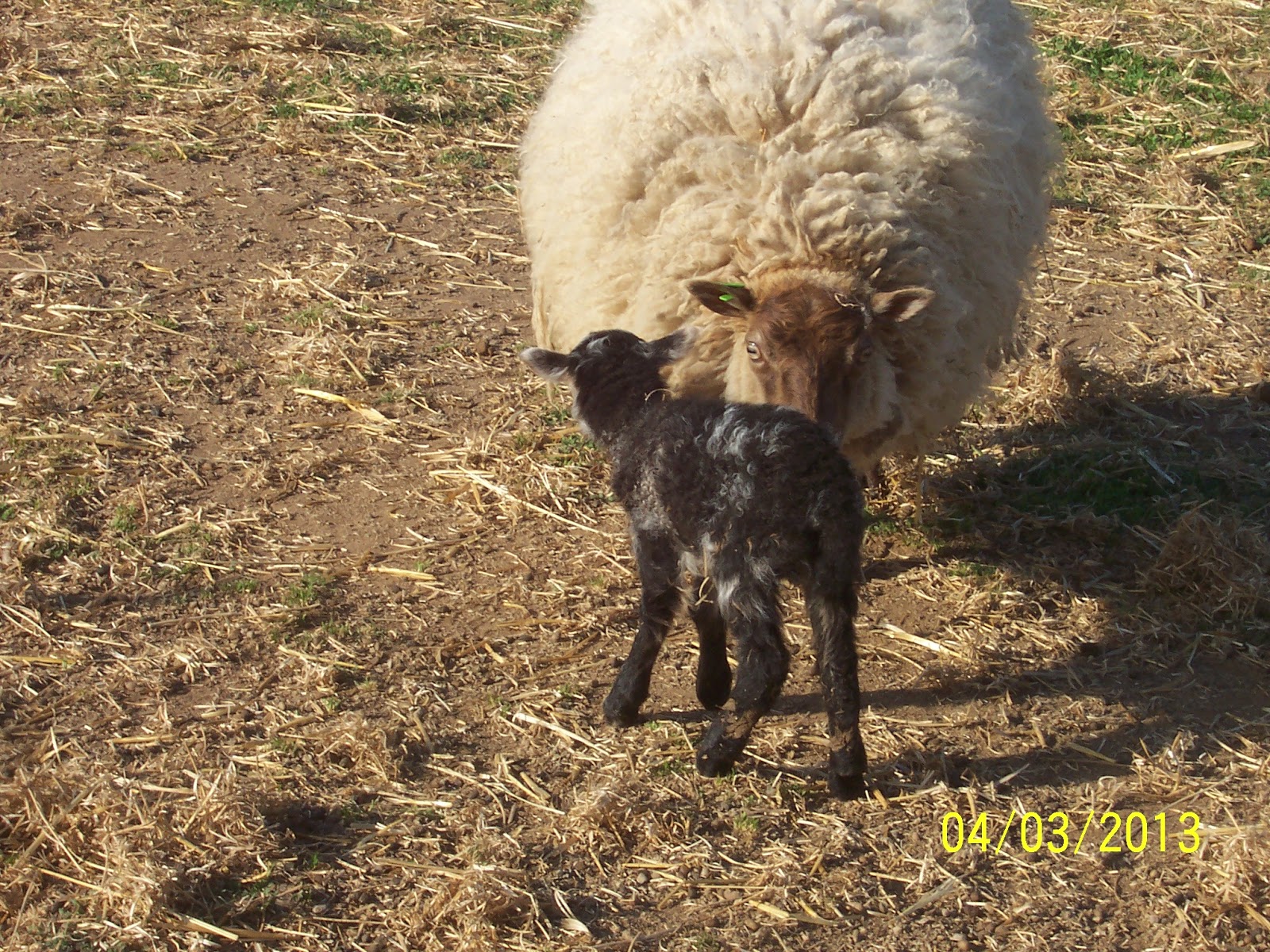 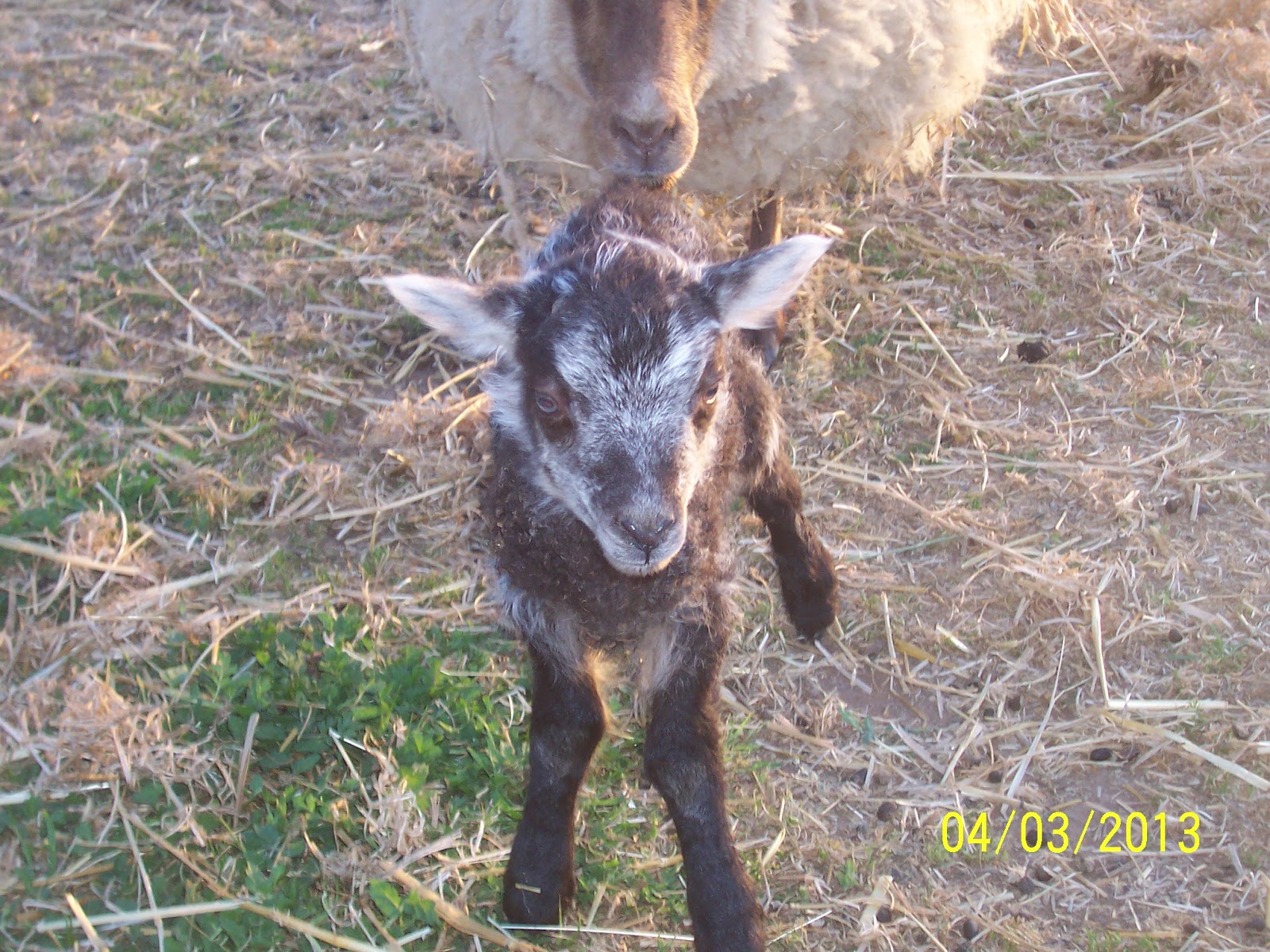 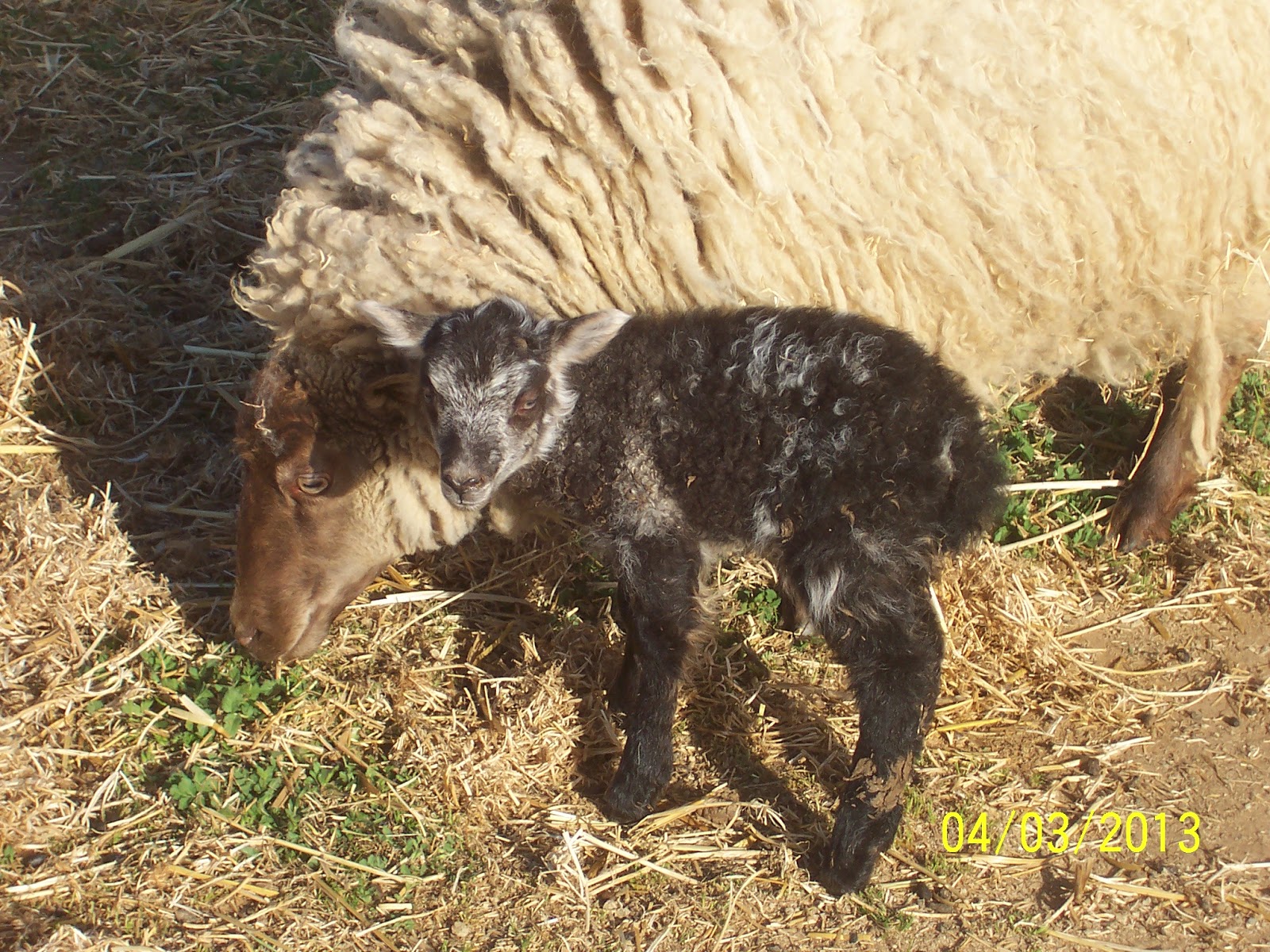 And this is one of the things I could not resist to put in the Wool House, I think I want to paint it white since I have some other wicker that is white.  This chair is child size so it will be just right for Lamb Chop. 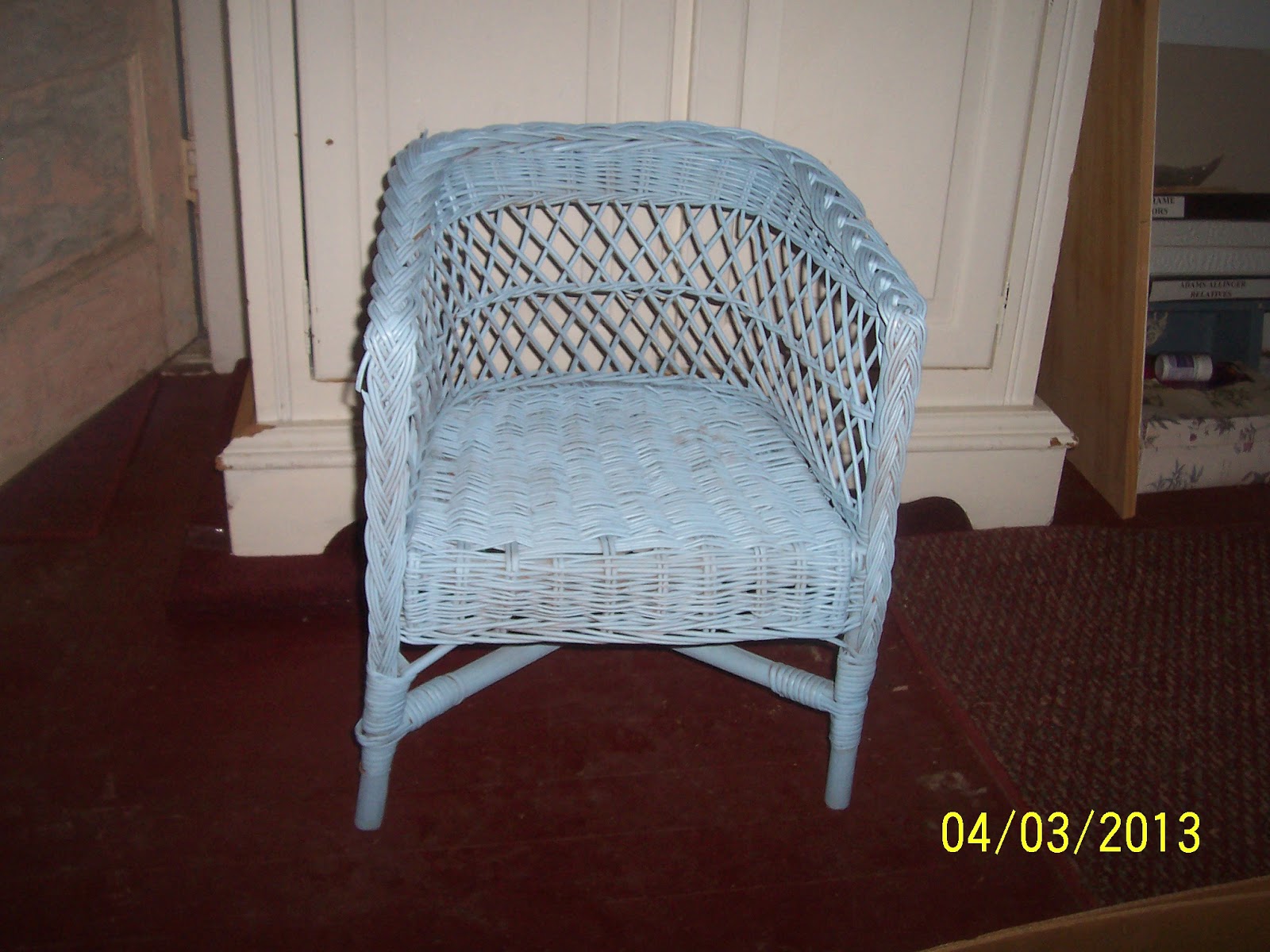 And then there was this goat sign, plus I found an old enamel ware bucket but picture was not too good, will have to try for another one after I put a plant in it. 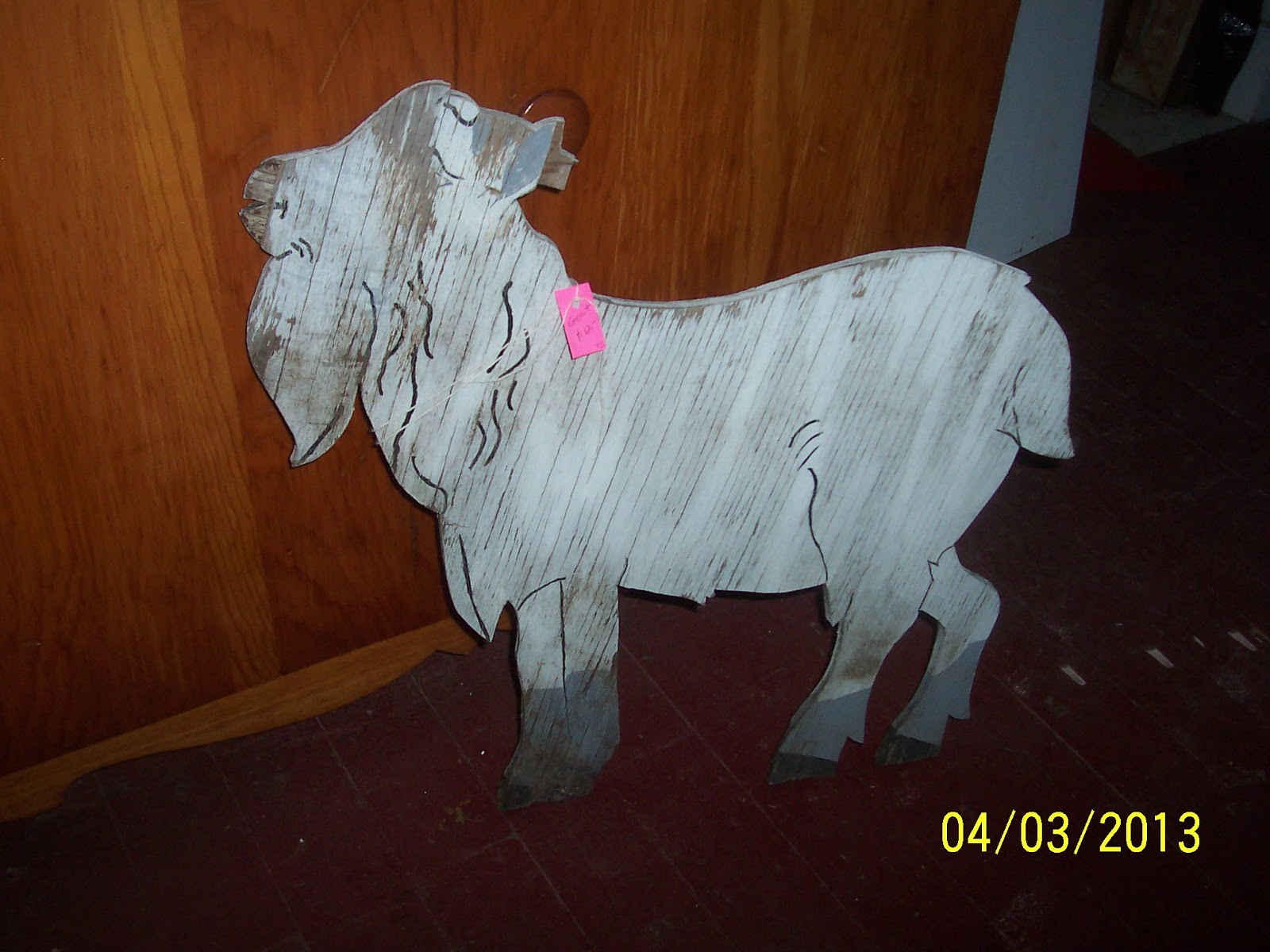 There is one more ewe from this group of  2 year olds yet to lamb, hopefully she will have a spectacular ewe lamb, then I'll have a month's reprieve before the older 4 ewes lamb in May.  One of the Pygoras I bought in October is showing signs of an udder so maybe one of those soon too.  I lost the little black Angora Billy, he just never seem to spunky or alert, I even tried several days of giving him a bottle thinking maybe he just was not getting enough milk from mama, she was a good attentive mama, so just one of those things of living with critters that don't always make for the best of times.

I keep reading blogs where everyone is tired of the snow.  I guess they must feel like this year winter is 8 months long.  Yet here pastures are already turning brown, I think California is in for about an 8 month summer.   Take care where ever you are.
Posted by Tombstone Livestock at 11:05 PM 8 comments:

and it's another ram, with frosted ears and some white on his body, didn't get any good pictures after I cleaned the straw off his nose. 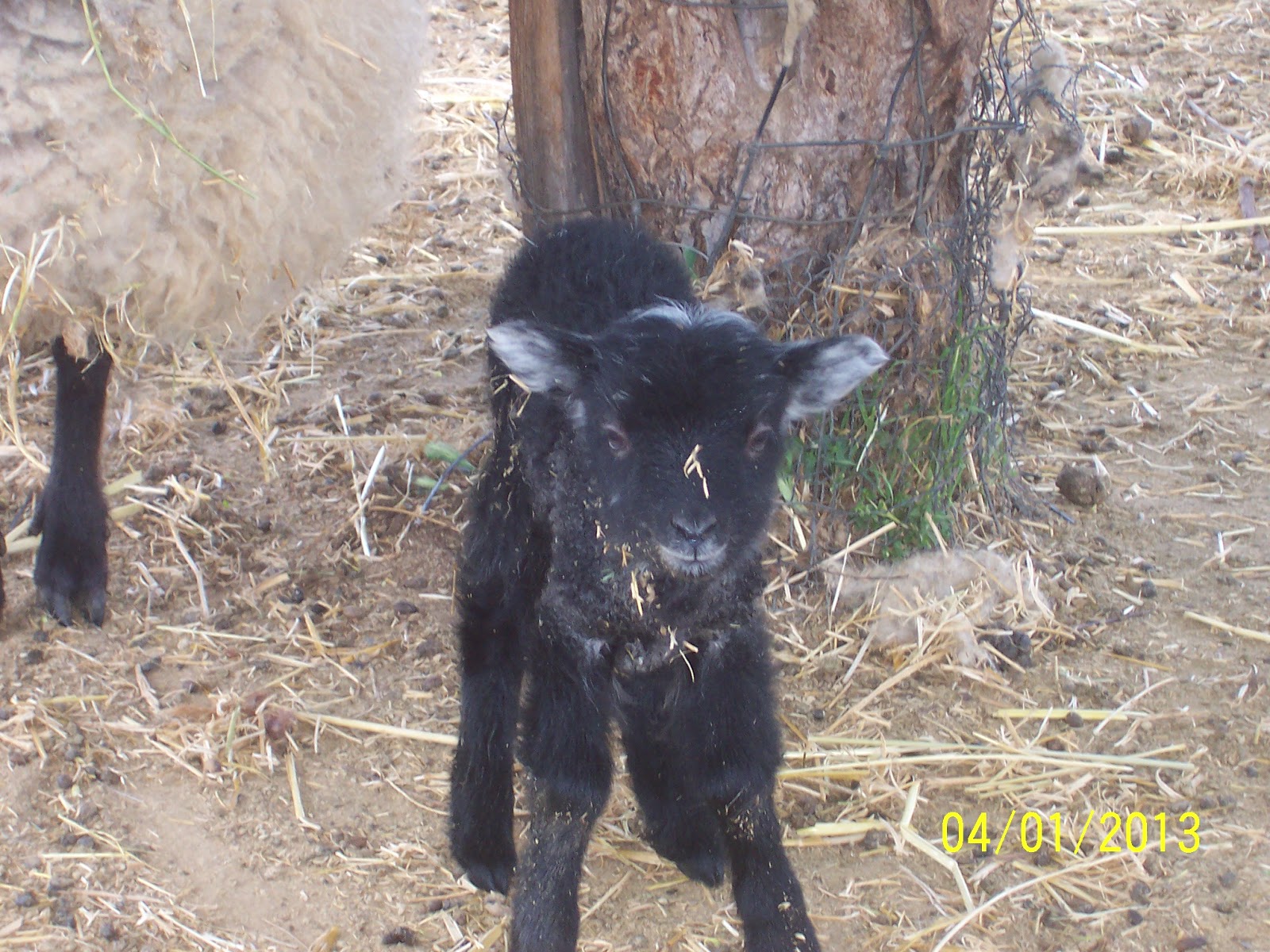 and him with his mama, Blain. 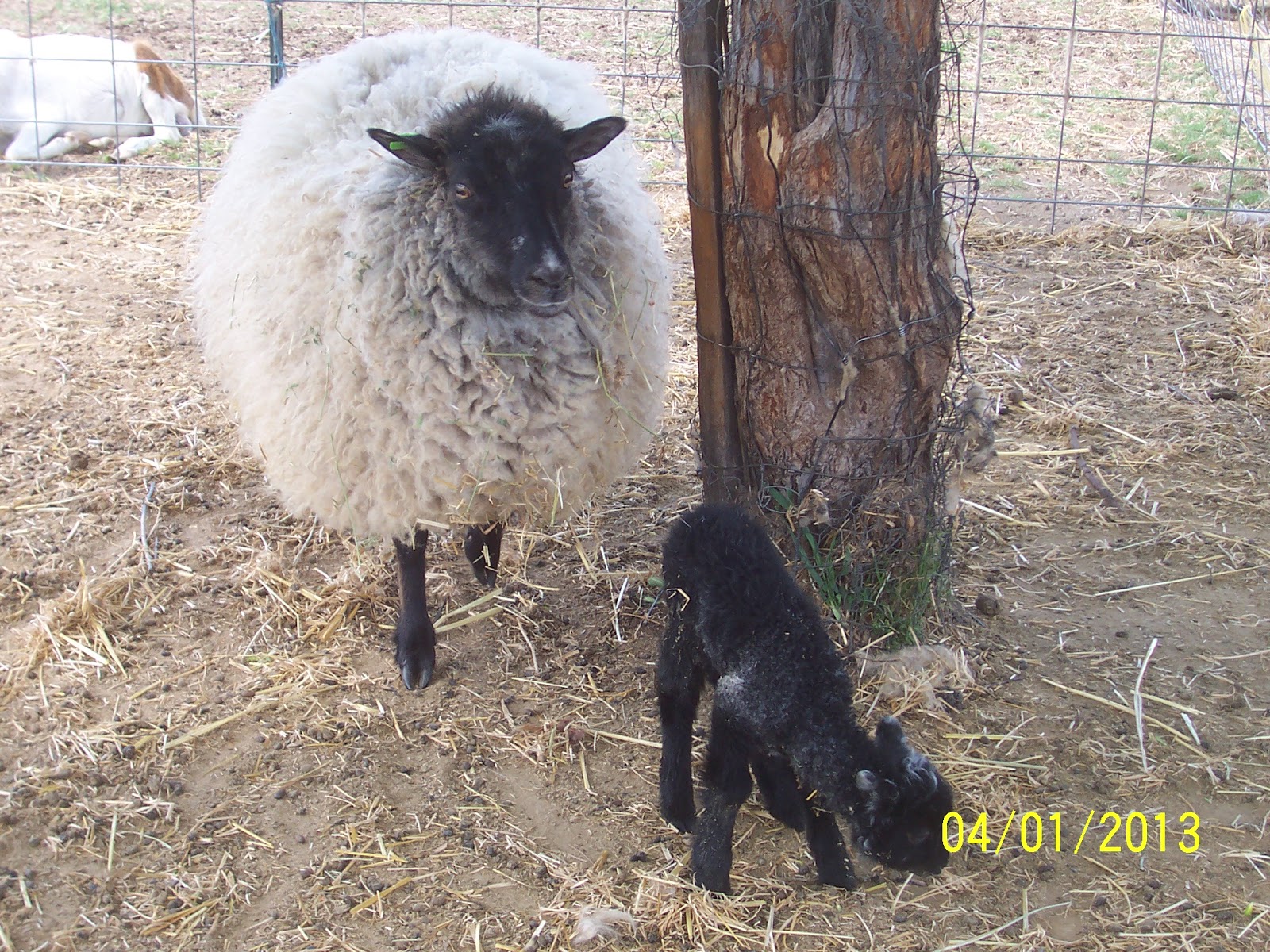