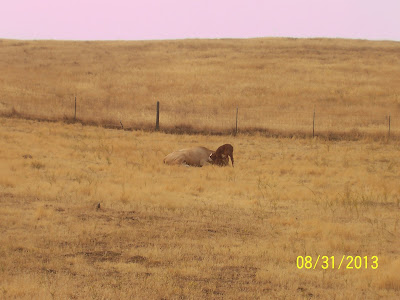 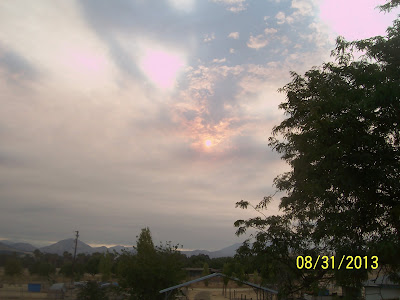 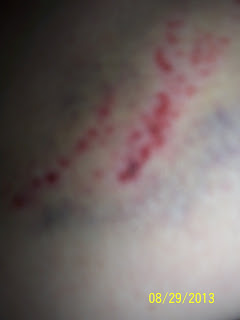 Looking forwatd to a change of seasons here, this one is the best, only one with 2 names, Autumn and Fall ..... maybe if I get out some fall decorations I can hurry it up .... Ya think?﻿
Posted by Tombstone Livestock at 12:48 PM 9 comments:

Social Media, is playing a big part in the wildfires of California.  The current big  fire in Stanislaus and Toulumne County and has now spread into NW Yosemite National Park has been growing rapidly.  One of the major concerns now is the water and power system at Hetch Hetchy Reservior that supplies the Ciry of San Francisco 150 miles away.  Originally I thought this was due to the several lightning strikes that started fires all over California last week,  which is likely, but I see now the cause is listed as unknown.  Let's all pray for these emergency personnel that are coming from all over California and Nevada as well.  Fortunately our temps have dropped at least 15 degrees this week.

In addition there is a local group of horse and livestock owners have a FB page listing locations, facilities, and equipment available for help if someone needs help to evacuate with links to Animal Control and the Sheriff's Posse.

California has had more than it's share of wildfires this year and do to the extreme dry conditions these fires are huge.  There is some excellent photography on these FB pages as well as Satellite images.  Two minutes on local network news just does not capture the magnitude of this fire.
Posted by Tombstone Livestock at 4:30 PM 9 comments:

I have always kept my Boer billy in with my Nubian / Boer does all year 'round, they always kidded in February or early March, no problem.  I don't keep smelly or destructive billies so no problem keeping them with the does.  Well this doe kidded on February 12, 2013 with a set of twins.  I have noticed lately that she was much fatter than the other 2 does.   Then last week her udder started to inflate like a large balloon. 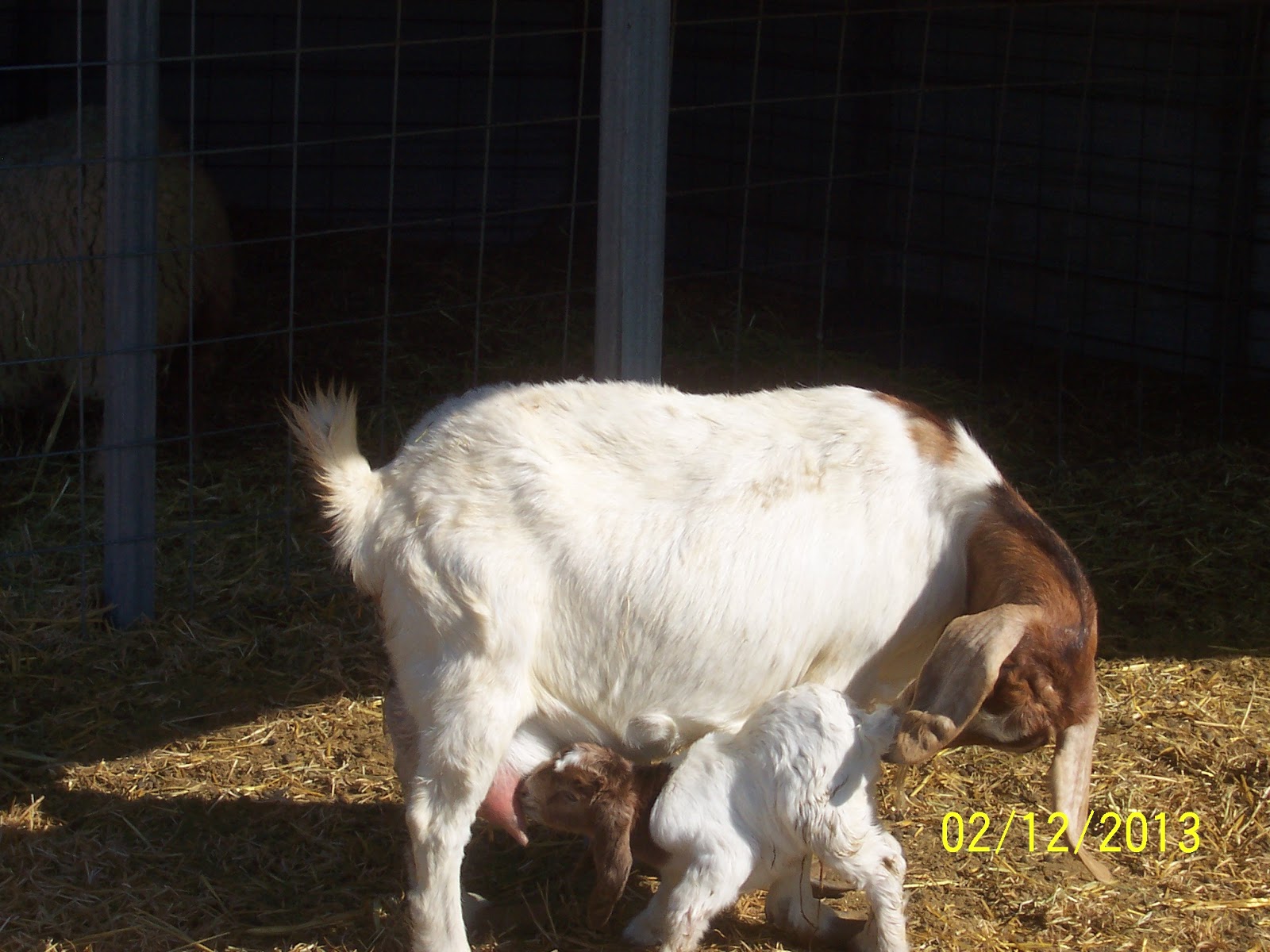 Saturday when I went out to feed this is what I found ...... another set of  twins, a little red billy and a nice little doe just like mama So, from February 12th to August 17th, that's only 6 months and 5 days ..... gestation period is 5 months ... must have something to do with the drought because Dorpers have been lambing at 7 months too.  Oh well so much for downsizing.  I really should put in more pens and separate off the billies and the rams and breed for February lambing / kidding only when there is some grass for them.  But I am sure they prefer to come into the world when it is nice and warm (HOT actually) and sunny vs. rainy, windy and cold. 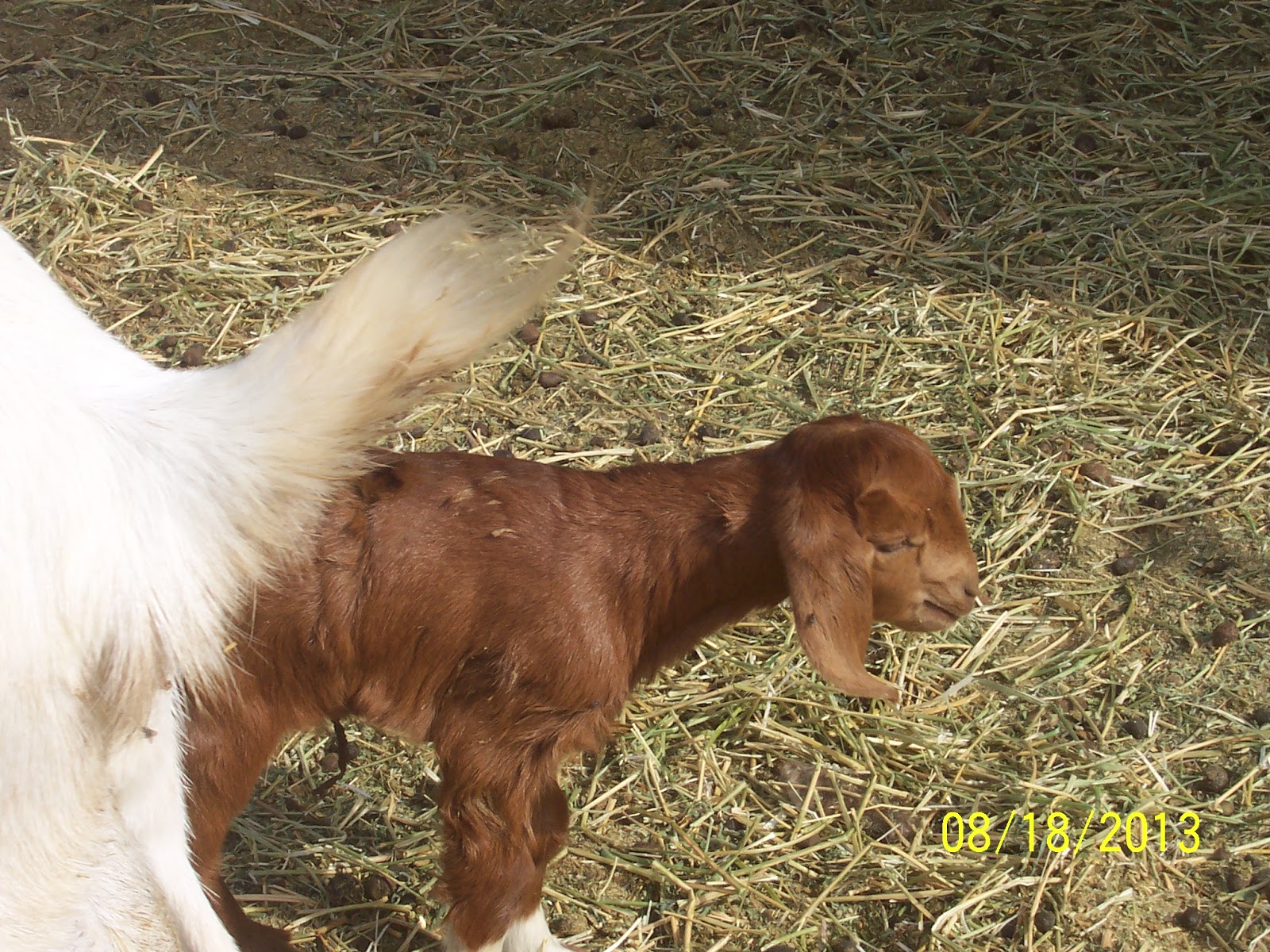 I wanted some better pictures today than the ones I got last night, but these two just did not want to co-operate for a photo shoot, as soon as I would put them where I wanted to take their picture they walked away, only time they were facing me they were in my shadow. 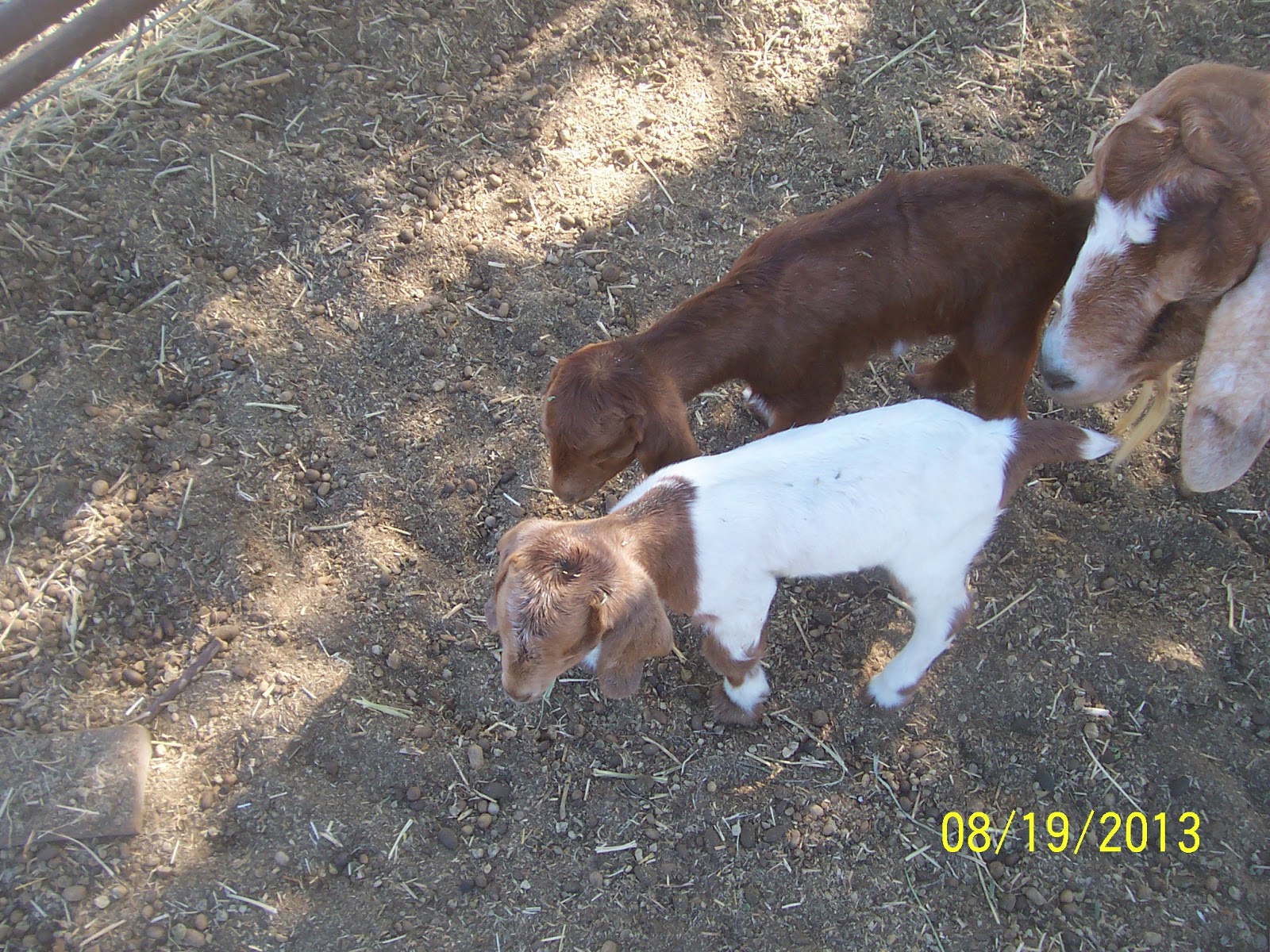 This mama doe was one of a set of triplets that were all naturally polled, am hoping this little girl will be too.  The does are getting old and it's time to have some new ones.  I have been waiting for the last couple years for more naturally polled doe kids, all I got was one buck, did not keep him.  Will keep rubbing the top of her head like Alladin's Lamp checking and hoping for no horns. 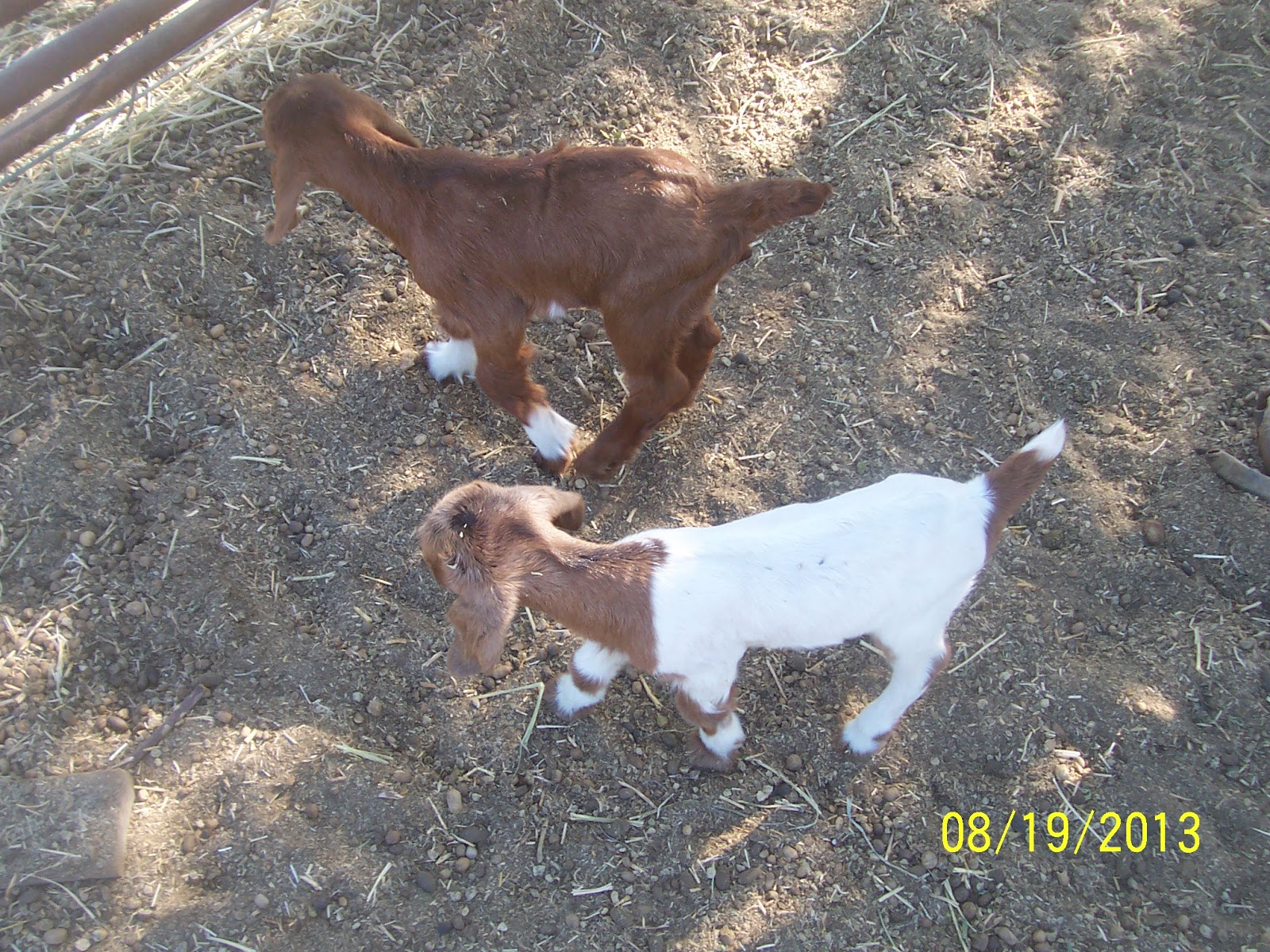 As for the Shetlands I do keep them separate since I have more than one ram and they are registered, getting to be time to decide which ewes will go with which rams and who will sit out this year.  I will have to do something for the Pygoras soon as I have a young kid to wean and don't want him in with the does.  He may have to become a wether.

Lots of thunder and lightning last night, no rain, started as I was finishing chores, fortunately it was cloud to cloud lightning vs. cloud to ground and off in the distance, I do not like being outside during thunder storms.  No problems here but my daughter lost power at her house few miles away when a transformer blew up.  Still some clouds today but am hoping the thunder and lightning are done.
Posted by Tombstone Livestock at 2:55 PM 9 comments:

When I went out to feed, I take the Dorpers out to the front pasture to feed so they do not follow me around the other sheep pens and pull hay off the mule.  When I opened the gate for them to go out there I was missing one, hmmmm, Ms. Widebody was not with them.  I looked thru recent photos cause I thought I had taken a picture recently, guess I didn't take one.  Well I found her in the old falling down barn along with a set of triplets, one ram and two ewe lambs.  I shouldn't complain, these guys are what pays the hay bill around here. 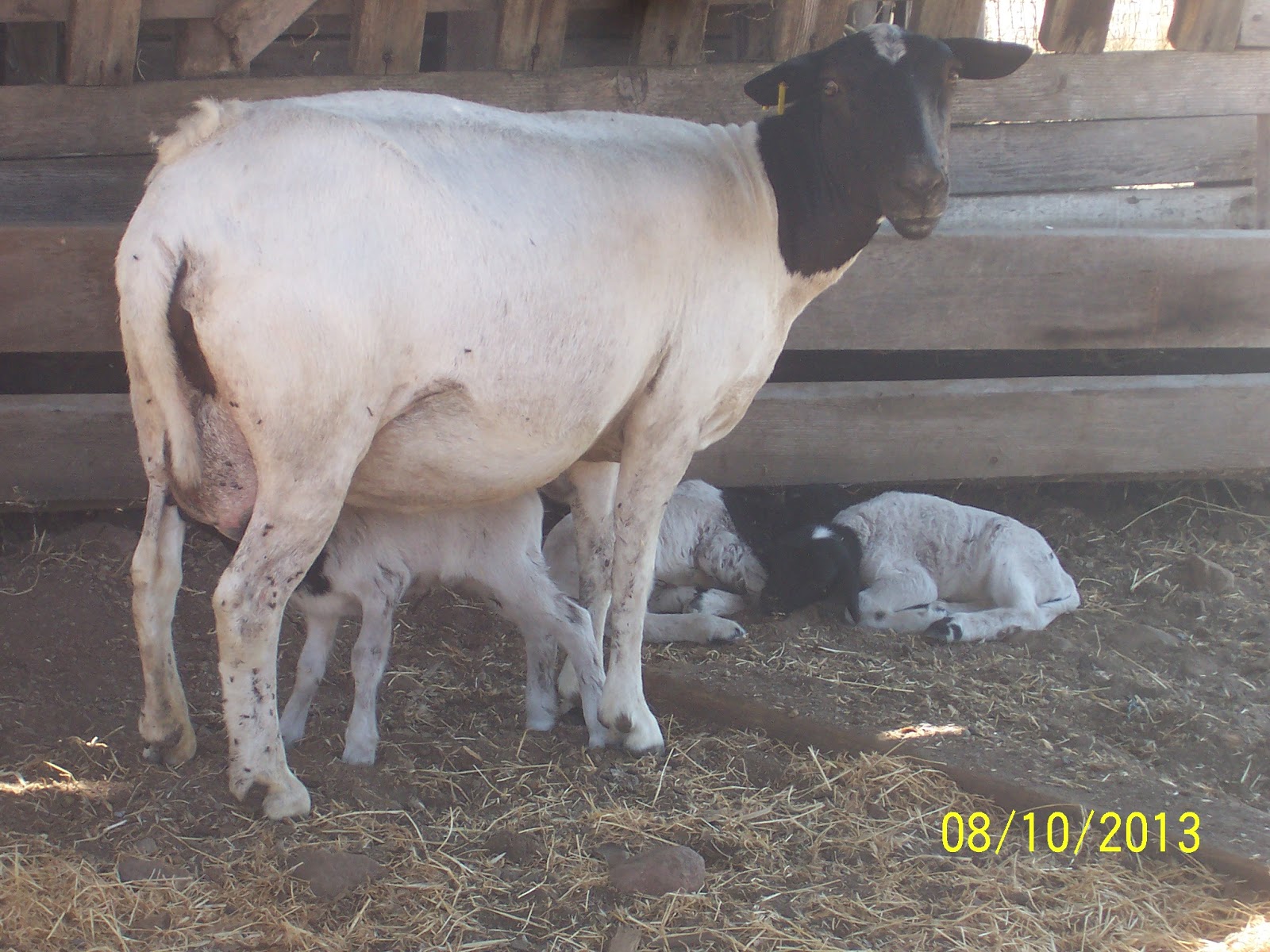 And also had a new little Pygora doe kid born week and half ago, so the Pygora herd has gone from the 4 I bought to now 6.  I noticed mama was getting chubbier but since she came with an udder from her last kidding I was not expecting her to kid the end of July. 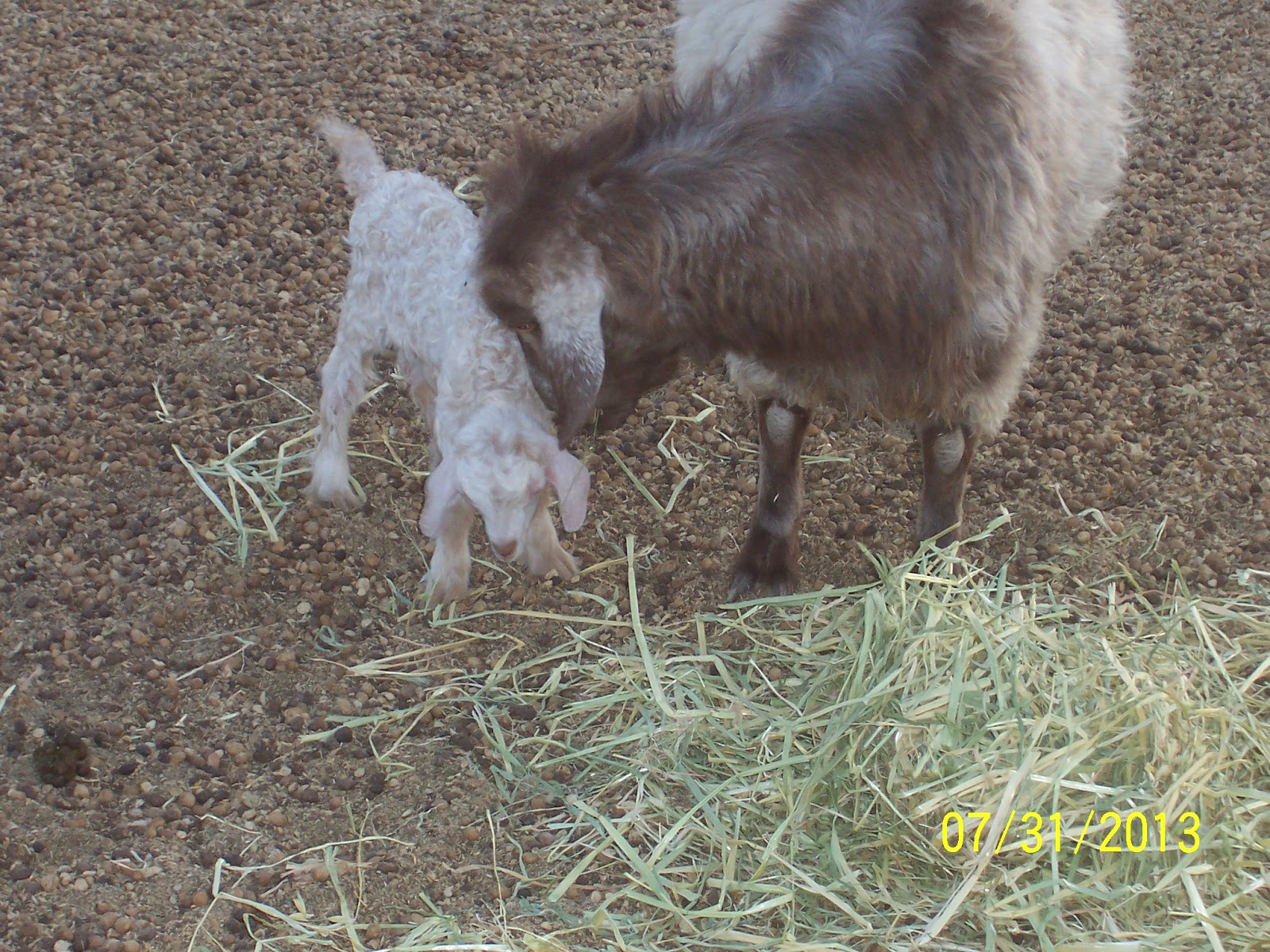 Well August is now one third over with, still hot and dry in good old sunny California, but we are getting closer and closer to fall every day.  I will be so happy this year to see rain, if we ever get any.

Take care, I wish there was some way to divert those storms over Kansas and Missouri to California and help our firefighters.  I just saw on the news recently the 19 Smoke Jumpers families will not get full benefits for their loss due to they were considered seasonal workers.  I'm sorry but their lives were worth as much as a full time firefighter in the long run.  Even if it was their first day on the job, their families deserve benefits for their commitment to go in harms way.

Putting away my soapbox for tonight.
Posted by Tombstone Livestock at 5:49 PM 15 comments: